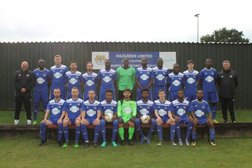 This re-arranged return fixture at Addlestone Moor, played just six days after Abbey Rangers had visited Berkeley Fields, provided an equally fast-tempo, competitive and entertaining contest which, like the first match, ended with the clubs earning a share of the spoils.  It was another game of two halves with North Greenford deservedly ending the first period a goal to the good, but with Abbey Rangers looking the stronger of the two teams after the interval, and the more likely to secure all three points.

Following a lively opening ten minutes it was in fact the home side that came closest to taking an early lead when young Greenford keeper Bailey Mulhall needed to make a good save to keep out a goal-bound Rangers effort.  From that point, however, United began to control the game, working hard to press and close down their opponents, and stringing together some promising attacks.

On the end of one of these the Blues broke the deadlock on 20 minutes, with Carl Bower playing a perfectly weighted pass to put Anthony O’Connor through on goal.  O’Connor made no mistake with a clinical finish past Abbey keeper Liam Stone.  This pattern of play continued up to the break with Greenford continuing to look the better of the two sides and, although Abbey won two corners on the stroke of half-time in their efforts to get back on level terms, the visitors comfortably protected their narrow first half advantage.

No doubt after some strong words from their management team during the interval, the Abbey Rangers players raised their game at the start of the second period and equalised within ten minutes of the re-start.  After a goal-bound strike had been blocked by the Greenford defence, striker Patrik Ruzieka found the back of the Blues net from the resultant corner with a bullet header that gave Mulhall no chance.

Some eight minutes later Abbey came agonisingly close to going ahead when, following another corner, two efforts on goal struck the United post and the Blues somehow managed to prevent the ball crossing their goal-line and clear the danger.  Shortly afterwards, on the hour, Ruzieka was played through on goal only to be flagged for offside.

To their credit, Greenford managed to steady the ship and partially halt the Rangers’ momentum, which was further affected on 70 minutes when Stone was injured following a clash with O’Connor.  Then, despite all the previous pressure from the home side, United managed to restore their narrow lead with a fine individual effort from left midfielder Sandro Costa who drove into the Abbey area and fired a shot into the corner.

Rangers deservedly drew level for a second time some five minutes before the end of normal time ensuring an exciting finale to the contest.  On this occasion Ruzieka turned provider as he played a clever ball through to strike partner Paul Hodges in space on the left of the Greenford area.  Hodges took a touch before producing an accurate low strike that beat Mulhall at his near post.

With a substantial period of stoppage time added by referee Jack Ohene as a result of the injury to Stone, both teams created opportunities to win the game, with a good chance falling to O’Connor for North Greenford, and Ruzieka and Hodges coming close for Abbey Rangers.  In the end, on the overall balance of play, a second draw between these two evenly-matched teams was a fair result after what had been another enjoyable and enthralling match.