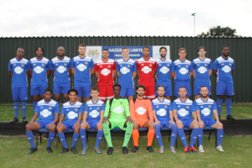 Braces by striker Dan Fleming, full-back Samad Kazi and midfielder Mark Bitmead secured a comfortable 6-3 win for Ashford Town (Middx) in this second round Middlesex FA Senior Charity Cup tie.  It was the second time this season that the Ash Trees had ended North Greenford’s involvement in a Senior County Cup competition.

United began the game well and, after absorbing early pressure from the visitors, took the lead on five minutes when Jamal Velinor made a strong run down the right before crossing the ball to Alfie Cain who scored from close range, placing his shot past Ash Trees keeper Tyler Tobin.

Ashford levelled the score ten minutes later following a similar run and cross from the right which found Fleming in space on the edge of the Blues six-yard box.  Fleming composed himself before finding the back of the net, beating keeper Lewis Todd with a clinical finish on the Blues’ keeper’s return to the first team after recovering from injury.

The remainder of the half was closely contested and entertaining, with both teams coping well on the soft, heavy pitch.  Six minutes before the interval, Greenford were again guilty of giving the ball away out on the left and Fleming was able to claim his second with another close range finish.

With the visitors still celebrating their goal, United re-started the contest with a swift attack that ended with Blues captain Daniel Vincent having a clear sight on goal.  Vincent made the most of the opportunity to quickly wipe out the Ash Trees advantage, driving his shot into the corner.

An injury to assistant referee James Barry led to an extended interval with Barry eventually replaced by veteran NGU official Pat McCrossan.  The delay seemed to have inspired Ashford to raise their game and within three minutes of the resumption they had regained the lead when a Mark Bitmead strike was deflected past Todd.

Greenford, on the other hand, began the half sluggishly and, on the hour, found themselves a further goal down, this time as the result of a magnificent long-range effort from full-back Samad Kazi.  Four minutes later Kazi scored again to effectively put the tie to bed.  On this occasion, from a wide right position, he found the opposite corner of the United goal, cleverly placing his shot over the advancing Todd.

To their credit, the Greenford players rallied at this point with George Moore coming close on 75 minutes after being played through on the right, and Vincent then producing a fabulous shot that found the roof of the Ash Trees net to notch up his second of the game and reduce the deficit.  However, eight minutes from time Bitmead went on to make certain of his side’s place in the next round, adding a sixth with a superb run and finish from out on the left.
.
NGU Team: Lewis Todd, Josh Lewis-Evans, Ryan Murphy, Charlie Conner, Guy Ansah-Palmer, Matt Travis, George Moore, Daniel Vincent (captain), Jamal Velinor (Sandro Costa 70), Kamal Akel (Carl Bower 65), Alfie Cain (Piotr Marek 60)
Share via
FacebookTwitter
https://www.pitchero.com/clubs
Recent news