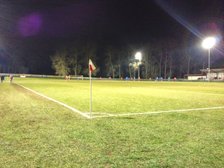 Another cup defeat on penalties

For the second Tuesday running North Greenford were knocked out of a cup competition after losing the Penalty Shoot-out. In both contests – both away ties – against Division One side Shefford Town and Campton last week in the SSML League Cup, and BetVictor Isthmian League Central Division side Northwood two days ago in the Middlesex Senior Challenge Cup, the Blues were unable to hold onto half-time leads allowing their opponents to grab late equalisers and take the game to penalties.

At the AcreTweed Stadium on Tuesday evening United could not have got off to a better start, scoring twice in the opening ten minutes. First striker James Barnett found the top corner of the Woods net with a looping header from a corner, followed shortly afterwards by Conor Molyneaux producing a clinical finish on the end of a fine Blues move.

From that point the Greenford players should have aimed to consolidate their early advantage, but instead began to needlessly concede possession in their own half, allowing the pacey Woods forwards to mount dangerous attacks, particularly down the right flank, only to be prevented from levelling the score by Blues keeper Evangelos Anastasakis who pulled off several excellent saves.

However he could do nothing to keep out a Kingsley Eshun strike on 22 minutes which halved the deficit, but continued to play a significant part in ensuring the visitors held onto what had become an extremely narrow advantage up to the break.

That pattern of play continued into the increasingly scrappy second period, with United managing to hold out right up until the 83rd minute when Sacha M’Baye eventually headed home the equaliser from Charlie Hayford’s corner.

Although both teams – who clearly have long, tough seasons ahead of them – tried all they knew to grab a winner and avoid the shoot-out lottery it wasn’t to be. And in the end it was Northwood, with five clinically converted penalties, who advance to the next round of the Senior Challenge Cup, although for neither club will this competition be regarded as a priority.