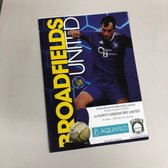 A dramatic ending to this enthralling, closely-fought and entertaining contest saw both sides score very late goals with Broadfields striker Radu Stefanoaica looking like he’d grabbed the winner for the hosts just minutes from the end, only for Greenford’s Joe Mills to fire home a stoppage-time free kick to claim a share of the spoils for the visitors.

That stoppage-time equaliser not only extended Greenford’s recent unbeaten run to four games it took the club off the bottom of the SSML Premier Division table for the first time this season moving the Blues above London Colney on goal difference following LCFC’s 3-0 home defeat by Arlesey Town.

To be honest the eventual draw hardly seemed a realistic possibility early on in the second half when, just five minutes after the break, Greenford conceded the softest of goals with centre-half Tom Ward deflecting a Fighting Cocks delivery that was going wide past House into the back of his own net, doubling the hosts lead and giving the visitors a mountain to climb or so it felt at that point in the game.

The truth was that Greenford had done well to hold out until the break to restrict the Fighting Cocks to just a single goal half-time advantage. Once again they had done so – a feature of their recent performances - through determined, resilient defending and another superb Sam House display between the sticks.

That goal scored by captain Harry Henley midway through the half – making no mistake after being allowed a free header from a corner – was all the hosts had to show for a half in which they created most of the goal-scoring opportunities.

James Barnett came close for Greenford with a fine strike from outside the area in the 13th minute but there were few other efforts on goal to test Fighting Cocks keeper Matthew Faley and, after 27 minutes, Greenford had to cope with 10 men after captain Andrew Manitou had been sin-binned.

The turning point for the visitors came on 65 minutes when Greenford strung together their most incisive attacking move of the game. Started in midfield by Nik Muller the ball was played down the left, eventually to left back Damel Dioum. Dioum placed a telling low delivery across the hosts six-yard box which was met by Barnett who slotted home from close range to reduce the deficit.

Within ten minutes Greenford had drawn level on this occasion courtesy of an excellent individual effort by midfielder Georgie Brown who, from outside the box, unleashed a superb unstoppable low drive into the corner that game Faley no chance.

Then came the dramatic finale. First, on 82 minutes, Broadfields were controversially awarded a free-kick just inside the Greenford half when play was brought back following an advantage that had been played by the hosts. From the ensuing free-kick, a perfectly flighted Ryan Phillips delivery Stefanoaica was able to comfortably head home what could well have proved the winner.

Greenford though had other ideas and some 3 minutes into stoppage time a massive House clearance was met by Barnett who was brought down just outside the Broadfields box by Liam O’Keefe earning the Fighting Cocks right back a red card.

Mills then proceeded to round off what had been a thoroughly entertaining contest with a fiercely struck and unstoppable free-kick to guarantee Greenford’s share of the spoils.

This had been a very spirited second half comeback by North Greenford in which the players showed tremendous character qualities they will surely aim to take into their two home games next week, the MFA Senior Charity Cup tie v Harefield on Tuesday, and the Premier Division league game against 4th placed Harpenden on Saturday.