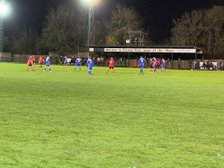 In our last game before lockdown we started badly and after four minutes we twice failed to clear the ball in the area and when it fell to Harefield's Richard Pacquette he deftly steered a header just inside the post to open the scoring.

For the rest of the half both sides had chances but most of the good approach play was undone by a poor final pass or cross and subsequently nothing clear cut ensued. On forty three minutes NGU looked like they were denied the first of two very good penalty appeals when a Harefield defender fell in the area and appeared to drag the ball back with his hand but the referee disagreed and waived play on. Both sides had bookings in a half that was threatening to boil over and we all hoped for a better spectacle in the second half.

The blues came out with a bit more urgency in the second half and after forty eight minutes Ekow Coker fired just wide. Harefield rallied and I n the next ten minutes Sam House in the NGU goal made three great saves to keep NGU in the game.

After fifty five minutes NGU brought on Andrew Manitou for Nick Kerley who immediately added some more steel to the midfield. On sixty five the Harefield keeper made a triple save to deny NGU an equaliser.

On 75 minutes the blues were denied what looked a great shout for a penalty with Joe Mills being dragged down when looking likely to get a shot off from 12 yards but the referees inexplicably gave a free kick the other way I assume for simulation. Equally puzzling, no yellow card which is standard for that offence?

On eighty minutes NGU did get that equaliser when substitute Andrew Manitou fired home from inside the area after Toju’s shot was blocked. The blues were on the ascendency then and five minutes later Ekow Coker headed wide from a corner.

Harefield went down to 10 for the last few minutes when Farhall was sin binned after showing dissent to being penalised for a somewhat soft challenge.

The NGU faithful expected the Alamo at the Harefield goal, instead it seemed to unsettle the away side who gave away some unecessary free kicks in their attempts to regain possession.

Five minutes into injury time Harefield got a free kick about twenty five yards out. Thomas Payne stepped up.....disaster for NGU as Sam House somehow let the ball slip through his hands into the net.

That was the last meaningful action of the game, definitely a game that should have earned a point if not all three.