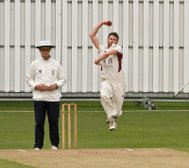 Club Skipper interviewed on League website - see why he joined the Midd, who would make his all time MCCL XI etc.

People enjoy their own and other's success. I think we have got a bit lucky with the personnel in our club – some great people who just enjoy playing cricket and enjoy each other's company.
Joel Hughes

Joel was recently interviewed by Salman Ali for the MCCL Website. With due acknowledgement to Salman, here is the Interview in full (photo courtesy of Conrad Williams) -

Ask any Premier League batsman who has played in the league in the past 10 years about the bowler they’d least like to face and I’m sure Joel Hughes will come up more often than not. He has spearheaded his side’s attack with year in year out success, taking a bundle of wickets in the process. Having turned his hand to captaincy, he’s continuing to play a major role for his club in their quest for league and cup honours. Read how Hornsey CC’s loss was North Middlesex’s gain and much more.

1. How did you first get into cricket?
My dad was a very keen cricketer, he played for Durham County when they were a minor county. My older brother is also a very good cricketer, so I was indoctrinated from a very early age. I started playing for my local club's under 13 when I was 9 and still love it as much as I did then.

2. How did you end up at North Middlesex CC?
I moved to London at the end of 2013 and I didn't know anything about the local leagues. I googled premier league clubs and found that Hornsey and North Middlesex were my closest two. I netted with both clubs and was swaying towards Hornsey, but on the evening I was deciding, I got a message from the esteemed Evan Flowers. I can only vaguely remember what he said but it converted me to the Midd.

3. What differences have you found between the leagues you have played in?
I found playing in the North can be a lot more hostile. It's not so much in London, but maybe that's also a sign of the times. I like that players can't get paid in the MCCL, makes it a more level playing field, though obviously some clubs don't toe that line, but it works in the main. This hasn't been the case in previous leagues I've played in which has meant the better players and teams are better but there is a bigger drop off with the smaller clubs.

4. What made you take up captaincy?
I used to captain all of my age group sides and have always liked the tactical side of the game. I've nearly taken up the captaincy at previous clubs and it's always been something I've wanted to do. To get the opportunity at a club as big and as good as North Middlesex has been a privilege.

5. What's been your favourite cricketing moment?
I think it has to be two moments in joint first place. I hit the winning runs for an old club in a final at Lords in 2008 that was pretty special. Secondly, playing in a final against Uganda in Rwanda as part of a Cricket Builds Hope tournament 2 years ago. Amazing where cricket can take you.

7. Are there any changes you would make in the MCCL?
One thing I like from my time in the North East Premier League is that there are extra points available if you bat first and declare (and win). I think there should be more incentive to declare. Also, lunch should be 30 mins in the all-day stuff too.

8. Who's the toughest opponent you have played against and with?
There is a guy I played against in the North East Premier League called Stephen Humble, he got me out every time I played against him and whacked me all over.
With, I'd probably say, another guy from the North East Prem, Wayne Ritzema, I was always impressed by his attitude and bottle. I remember him getting 99 against Simon Brown (ex Durham and England player) and Franklyn Rose (ex West Indies), serious knock.

9. Where would you like to see North Middlesex in the next three years?
I'd like to see a few more juniors coming through, post the purple era of Luke, Joe, Ethan, Max and Hugh. I want us to see us stay in the top 3 or thereabouts and obviously the dream is to win the league. I would say that the energy and organisation that goes into our junior section is really impressive. A thriving junior section generally underpins a successful club and the central figure at North Middlesex is Richard Nicoll - you can't underestimate his contribution to the club over the years. Along with a team of people behind the scenes who genuinely have the club's best interests at heart - it means the club is run democratically and doesn't operate to serve individual egos.
In terms of the seniors, there is a culture of team first. People enjoy their own and other's success. I think we have got a bit lucky with the personnel in our club – some great people who just enjoy playing cricket and enjoy each other's company. People tend not to stop playing for the Midd unless they move away – we have very few people move club which is a great sign.

10. What would be your all time MCCL eleven?
Joe Cracknell – North Middlesex CC - great attacking batsmen, I would hate to bowl at him. Starting to show his quality this year and there's a lot more to come.

Luke Hollman – North Middlesex CC - Luke has been prolific for the last two years, he can be gritty, he can accumulate and he hits a long ball when he wants. Bowls lovely leggies too.

Ollie Wilkin – Ealing CC - the most destructive batsmen in the league, great eye and good competitor.

Michael Phillipson (overseas) - Hornsey CC – profilic run getter, got a great 100 against us on a dodgy wicket. Bowls some handy seam up as well.

Steve Clark – Hampstead CC - one of the best all-rounders in the league, strong and aggressive competitor and central figure in Hampstead's success over the years.