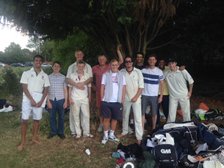 The 2015 season started strongly, first with a big win against the 3rd XI in the inaugural North Midd Ashes contest, and then winning the first five league matches, including two big wins in a row chasing down 220+ from 45 over overs, both times doing it with six or seven overs to spare, thanks to great partnerships between Gaurav (102) and Richard (61) against Finchley and then Tommy Barrow (94) and Paddy (72) against Ickenham.

Then came a top-of-the-table clash against Acton, Pistol picked up a 7-fer, but again they made it to 55 overs, meaning this week’s 45 over target was 212 to win. Another great innings of 79 from Tommy got us painstakingly close, only for him to end up with a single off the last ball from the 45th over to tie the scores, but leave us with a frustrating winning draw.

If Acton was frustrating, then Hornsey the week later was horrific. Put into bat against our enigmatic rivals, we crumbled, but inched our way up to 116. The response was a show of strength, Hornsey knocking off the runs without losing a wicket. Dark day for the previously unbeaten 4th XI. Back at the Stow the week later, the once high-flying 4s were reduced to 66/6 against Barnes before Mike Wilson and Dykie bashed their way to 25 runs each to take our tally up to 120. Things looked grim again, but a much more consistent bowling effort had Barnes seven down as the fell over the line to win. Then at Brondesbury, after posting a reasonable 218, including 81 from 58 from Gaurav, their opener smashed us everywhere and when he was finally out for 101, the total was only 118. Though they struggled a bit after that, it gave them the impetus to get over the line, inflicting the first ever three-losses-in-a-row on the Mighty 4s.

At Twickenham, Joe Bridgland, making his first 4s appearance for more than five years, made the day his own, after smashing 49* off about five overs, he took 4/42, which included putting their best batsman in hospital. Dykie also cleaned up with a five-fer, giving the 4s their first win in over a month.

In the previous season, Chrissy’s batting fortunes followed the pattern of duck, fifty, duck, fifty, duck, fifty. This season though, his scores had been 8, 1, 1, 4. Was he getting the low ones out of the way first? Of course he was! At Harrow, he belted an amazing maiden century of 130 to all parts of the ground (not just the off side!). And sure enough, things changed after this, as his following scores were 50*, 55 and 42.

A lame draw against Acton followed, where we posted 269/7 from 49 overs then the oppo refused to enter the game and blocked out without ever going for the runs. Then came the most satisfying moment of the season. After our first round ten-wicket loss against Hornsey, a spicy game ensued, with their skipper probably not in his most sporting moods (this included kicking the stumps out of the ground when a run out was missed, and running out the injured Yohan (who had a runner) as he hobbled back to his spot at square leg). In the end, we turned the tables and knocked them off at their place. Very nice!

Hopes were high for a strong season finish as we travelled to Barnes, but the with the late-season early-start surprising everyone, we walked on to the field with only seven players, with Guarav still at Clapham Junction, Richard and Percy traveling around the North Circular and Joseph somewhere in Kent making his way back from Brussels on the overnight bus. But we started very strongly with the short numbers, having them 10/1 off five overs when Gaurav arrived and 23/2 off 14 overs when the Veritys came onto the field. Sadly though, at this point everyone forgot how to field and they got 250! And after losing the top order relatively early, the Mighty 4s never gave up and looked for the draw, but kept up the chase even when we were nine down, only to fall twenty runs short. A relatively easy game against Brondesbury followed to finished the season, which included Crackers, who’d not pulled on a 4s jumper for a few years.

This meant the Mighty 4s had finished 3rd behind Finchley and Acton. The first time since 2007 that we had not finished in a promotion position. An amazing seven-year run had come to an end.

The 4s Player of the Year for 2015 was an easy choice, with Gaurav compiling 680 runs (591 runs in the league), 13 catches, 16 wickets, and his maiden century. An excellent year from from an excellent player. It was the best team batting effort for a long time, with Richard, Pistol and Chrissy all notching 300 odd runs and Paddy, Tommy and Carl knocking up 200 odd runs. Future North Midd Legend Percy Verity also topped the batting averages at 53 and bowled way too quick for this league. Hopefully he can stay fit next year because he will cause a lot of trouble to a lot of teams. On the bowling front, Pistol led the field with 46 wickets at 17 with four 5-fers, ably supported by Gaurav, Bootsy, Fergus and Dykie

This year we also started the Fegan’s Finest award, generously donated by North Midd 4s Legend Seanie Fegan, where points were awarded each game (3 for Man of the Match, 2 for 2nd and 1 for third) by each of the players. And in the inaugural year, the award was shared between Pistol and Gaurav, both finishing on 22 points.

After my second stint at skippering and nine years of the 4s, I will be standing down as captain, but i am so happy about the how the 4s have developed as a team and how we play the game. We always play with positivity and aggression. Always to win, never to draw. Score the runs quick then bowl them out. Most of the time with no third man or fine leg and always close in catchers. It has been a pleasure to captain and play with these guys. It’s sad that the promotion run is over, but it was a great ride while it lasted. Let’s make the tenth year year of the Mighty 4s a memorable one!