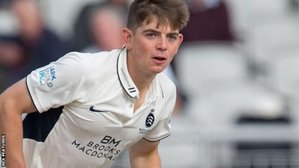 Ethan Bamber took his maiden five-wicket haul for Middlesex as they drew with Derbyshire on a final day affected by rain. When the skippers shook hands on a draw, Derbyshire were on 304 for 7 in a rain affected match. Ethan had taken 5 of those wickets. Who's to say that he wouldn't have taken more if the innings had been completed!

Worth noting that the Midd's 19 year old star, Luke Hollman was 12th man in this match.