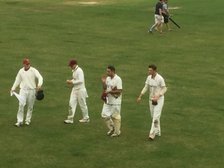 Plenty of support for the 1s at Hampstead but sadly it didn't lead to any points. Fortunately no major damage done - with Ealing taking one point from a rain off, we are only one point behind them.

Driving to the lovely Hampstead ground, the streets were wet from overnight rain, and a firm drizzle dampened the windscreen. On arrival, the pitch and run-ups were well covered by a large sheet and were dry underneath, but several ‘ends’ on the square were wet, and it was clear that there would be a delayed start.

By 11.00 the drizzle had stopped and the excellent Jarvo (groundsman) estimated that the ground could be fit in two and a half hours if the rain stayed away. He and his team than set to work with super-soppers and hot-air blowers, clearing the water from the sheet and drying the ends as well as cutting the pitch square and outfield: it was an impressive display and very effective, so that a 1.30 start was announced as promised (it’s hard to imagine any other ground in Middlesex that could have staged this recovery so professionally and the other four Premier division matches were duly cancelled). This meant a wonderful opportunity for North Middlesex to steal a march on their rivals and they duly won a very important toss and elected to field. Unfortunately, at 1.15 firm rain returned and the cover was put back on; the rain steadily decreased in intensity over the next half hour to a very light drizzle; there was then a frustrating period of half an hour where the players of both sides were happily playing with footballs in separate groups, and the umpires waited for the light drizzle to stop. Whatever, the umpires eventually announced that play would begin at 2.30 and that 85 overs remained, with the hosts having a maximum of 47 overs for the first innings.

North Middlesex replaced both Nicolls and O’Driscoll with Joe Cracknell (now deemed fit by Middlesex), Evan Flowers and Alex MacQueen. It is a fact that cricketers, on days such as this when there is uncertainty and waiting around, often find it hard to motivate themselves mentally before the start; the visitors only began to arrive at 12.50 for a 1.30 start and then walked through a few routines waiting for a decision from the umpires. Inevitably, a half chance went down in the first over and both Hampstead openers sensibly went about building a foundation for the innings, running good short singles interspersed with the occasional boundary; three impassioned appeals for lbw were resolutely dismissed. The pitch played remarkably well given the inevitable moisture underneath, and the breakthrough only came in the 13th over from Joel Hughes when an in-swinger castled the left-handed Biddulph (42-1, 15). Next over, Max Harris found a beauty to hit the top of ex-Sussex Callum Jackson’s off stump (45-2, 1) and the visitors were back on track. Left-handed Mubasher Hassan had been the more aggressive opener, striking some fluent boundaries and he found a reliable partner in Evison; the pair added 43 in 10 overs before the former edged another pitched-up delivery from Harris to be smartly caught at slip by James Parslow (88-3, 39). Because of the ECB ‘young’ fast-bowling restrictions, this was Harris’ last over, and it had been his most impressive spell in recent memory; generating significant pace and bowling a fuller length, interspersed with some brisk bouncers, one of which resoundingly clouted Evison on the helmet. Keen provided further support as the score steadily increased until Alex MacQueen trapped Evison palpably lbw (108-4, 45): he had played sensibly and fluently throughout and faced 59 balls. A couple of overs later the same bowler induced Keen into giving a straightforward catch to Hughes at mid-wicket (117-5, 10).

Up to this point, the hosts had been content to coast at just above three-an-over (this was worth substantially more in normal conditions because inevitably, the outfield was very slow, and boundaries were scarce); however, only 12 overs remained, and Pieris and Skipper Watson set about increasing the tempo with more aggressive running: they had added 33 when Pieris was run out by a fine throw from MacQueen in the deep (150-6, 21), and two balls later Harris bowled Watson (151-7, 17). A returning Hughes then had Litherland caught behind (154-8, 1), Hill ran out Sambhi (156-9, 1), and Hughes had Barlow well caught on the deep square leg boundary by Tikare (161 all out, 6) with one ball remaining.

Once again Hughes bowled with miserly control (13.5-2-31-3), very well supported by Harris (9-1-29-3) and the parsimonious MacQueen (11-0-36-2). Nonetheless, 161 looked a sizeable total to chase in the conditions, especially in 9 fewer overs. This was to be further reduced by three to just 35 overs after two further short interruptions for showers after tea, so that the target score for a faster run-rate (for 4 points) was 121.
Mark Williams PS: glossary: ‘ends’: the worn ends of used pitches on the square the last to dry and often fill with surface water; ‘ECB young fast bowling restrictions’: a system that has undoubtedly reduced the number of young fast bowling back and joint injuries: it restricts such bowlers to 7 overs in a spell and 18 in a day.