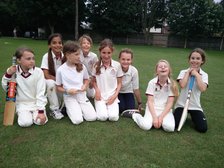 Women’s and Girls Cricket at North Middlesex CC in 2019

From All Stars Cricket to the Women’s County Championship

In 2019 womens and girls cricket at North Middlesex CC ranged from the Women’s County Championship to All Stars Cricket for the very youngest girls.

North Midd ran All Stars Cricket for five to eight year old boys and girls. This attracted a number of young girls to play cricket at North Midd.

Cricket offers girls the opportunity to develop leadership skills, for example through setting the field and choosing the bowling order. A number of older North Midd girls helped also develop their leadership skills by helping the coaches who ran the All Stars Cricket practices.

The older age group in girls cricket league is Under 15 and this is the first year that some members of the North Midd girls squad were too old to play in the girls cricket leagues. This was also the first year of the collaboration between North Middlesex CC and North London CC to field teams in the Middlesex Women’s Cricket Championship. The teams played in both the 40 over and T20 competitions. Nine older North Midd girls and one North Midd mum played in the teams. North Midd also hosted two of the women’s T20 matches.

Several North Midd girls played for London Schools Cricket Association over the summer. In the pre-season several girls trained with Middlesex and Regional Age Group Squads, also a number of girls trained with the England Women and Girls Indoor Squad.

North Middlesex Girls were selected to represent North Division in all three age groups in Girls Regional Cricket in 2019, and six of the seventeen players in the Under 14 age group were from North Midd.

North Midd entered teams in all four age groups in the Middlesex Seaxe Girls League: Under 10, Under 12, Under 14 and Under 15, they also played in the Under 11 Lady Taverners Festival. The girls teams played a lot of cricket and there were many great performances. The Under 10’s and Under 15’s, both finished as runners up in their leagues, with the Under 10’s qualifying for County Finals Day.

These matches were supported by Sunday morning practices, and it was great to see how the girls improved over the season. The practices were led by ECB Level Two coaches and were supported by the club Head Coach. Each week covered batting, bowling and fielding and every fourth week there was a focus on match based practice, and across the whole of the season all disciplines were covered. We also ran our own indoor practices in the sports hall of a local school at the beginning of the year, and girls were also included in the North Middlesex CC Academy.

North Midd took girls cricket in to the community. The Girls Teams coaches took an assembly at Hornsey School for Girls and also took a PE lesson at the school.

To finish the season we ran a girls cricket competition between three teams of North Midd Girls for at Juniors Day, before presenting the awards for Player of The Year in each age group and the Georgia Morris Batting Award.

We are now planning indoor training and indoor fixtures for the winter.