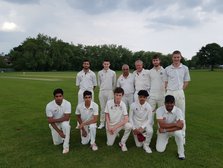 5s back to Winning Ways

'Winning solves everything,' once mused fifteen-time major winner and one-time drink driver Tiger Woods. An apt quote to describe this, the 5s first victory in timed cricket this season, following three immensely frustrating weeks of nearly stories and Kumar Dharmesena style umpiring.
The 5s turned up to a hard pitch at Peter May and were not surprised when Stoke Newington opted to have first use. Shay Kohler began a touch waywardly, but produced an absolute seed to remove their opener in the first over. The ever steady Nirusha, second only to Atula in the list of 5s Sri Lankan players, also began well, squeezing runs from the off and collecting an early wicket too, the number 3 skewing to backward point. SN then developed a frustrating partnership - Dykey, a welcome return to the side, kept things really tight, as 23 runs came off 15 overs, but the wicket eluded us as the visitors pressed on to 110/3. Eventually, we got the breakthrough; Will Frais (6-2-14-2) finding the edge, with Nico producing an outstanding catch away to his right. Two overs later, the young duo combined again and, with Tim Oon also claiming a deserved scalp, the Midd had reduced the opposition to 130/6. Dykey returned to strike and Nirusha picked up the last two wickets to finish with the exceptional figures of 14-5-39-4. An interesting run out call gave their number 8 a reprieve, as he clubbed 44 to set up a dicey target of 184 off 43 overs.
In reply, Adam Frais (20) and Linus (15) made a watchful start, picking off the bad balls and keeping out the good ones. Will replaced Linus and looked in touch from the outset, accelerating as he progressed. He struck a magnificent bomb over midwicket and followed that with a clip through point for four and he moved serenely to 43. Sadly, his innings was ended as he edged behind, but the Midd were still well placed at 100/3, the required run rate at 5.5. Richard joined Josh Avigdor and the pair knocked off some more runs, albeit with the rate still climbing. Both scored boundaries and Richard sprinted between the wickets in a way we can only hope to come our 60s. The ever dependable angler went past 300 runs for the season, the third straight campaign he has achieved the feat. Charles joined him and continued his recent strike rate renaissance, chancing his arm for 26 before finding mid wicket. Richard pressed on, but was run out for 28 with ten still needed. Nico was lbw, still 9 required off 2 overs. Fortunately, Tim Oon agreed to avoid deliberately sabotaging his own fantasy team and tickled one fine for a crucial 9 red and the victory. A really good game of cricket with a very pleasing outcome. Crouch End await next week. They don't block it. The performances the youngesters are turning out week after week in a tight and competitive division are fantastic. Special mention to Nico, who kept brilliantly. Dykey was a huge addition with the ball and in the field. The attitude was spot on. Play like this until the season ends and we have every chance of a top 2 finish.
Share via
FacebookTwitter
https://www.northmiddlesexcc.c
Recent news