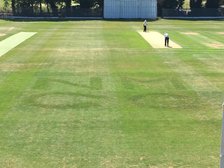 North Midd U11A Vs Hornsey U11

Back to winning ways

At last a sunny bright evening for Cricket at North Midd!
The Under 11A team faced Hornsey U11s in determined mood after losing at Hampstead on Friday night after a good comeback in the field just failed save the game.
Jonah lost the toss and Hornsey decided to bat – the boys had wanted to field so losing the toss was no bad thing.
Having bowled and fielded really well in all matches this season our performance in the field was slightly off with early wides and some good batting putting us on the back foot. The fielding improved as the innings progressed but still too many overthrows, byes and mis-fields – plenty to work on at Sunday training. Having said that two excellent run outs – one a stumping, gave us something to cheer and wickets from both Jonah’s and from Tom and Euan kept the Hornsey total to 95 from 20 overs. Man and of the match in the field went to Euan for his excellent fielding
with Sachin and Jonah bowling well to limit the batters to only 5 from their two overs.
Robbie and Cameron opened the batting with instructions to play themselves in and communicate well for singles and twos. Best made plans are not always adhered too and so it proved as a near run out on the second ball was followed by Cameron being clean bowled on the third playing a less than defensive shot. Jonah joined Robbie who was doing just as asked and playing himself in taking singles and calling well. Both batters looked well set as the score went to 30 before Robbie was run out by Jonah in attempting to take a suicidal run to the keeper. Robbie rightly hesitated but in doing could not get back and was out as the pair had not crossed. Jonah rightly apologised at the end but in batting for 11 Robbie had opened the innings really well.
Euan came in at number 4 and looked good before swinging at a straight one in his first over. Jonah and Tom steadied the innings with Tom 27 in 4s and 2s while Jonah kept the other end to reach 39 before both were retired with 10 to score. Max finished off the win with 5 well taken singles with Oscar chipping in with 2 and Ben seeing out the others.
A good win with 4 good batting performances that show what we can do when we focus on the basics and take our opportunities. Focus for training must be our fielding – collecting the ball and putting more pressure on the batters.
Man of the Match went to Jonah C for his 39 and tight bowling with Tom getting a mention for his wicket and strong hitting.
Share via
FacebookTwitter
https://www.northmiddlesexcc.c
Recent news