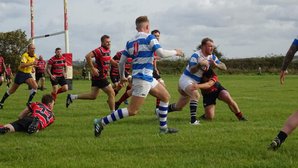 Oh Shields do like to be by the seaside as they rack up a dozen!...