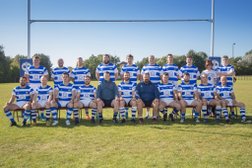 Shields miss out in Redcar

Shields made the trip to Redcar is a positive mood after the good home win against Prudhoe, but once again the team was subject to last minute cry-offs and changes and only 17 men made the trip.

Ben Dalton moved to Hooker so Josh Stewart started in the back row. Dave Hardy replaced Mark Hall in the second row and Warren Anderson captained the side.

The game started at a fast pace, with both sides pretty much cancelling each other out. When Redcar did threaten the Shields line, they found no way through a fierce blue and white defense. Shields had a few opportunities to score in the first half but were sadly unable to secure any points. It was a strong first half performance from the Shieldsmen and it all looked to be heading to a 0-0 deadlock at the break. Unfortunately with a minute to go the Redcar winger managed to find a gap in the Shields defense and ran in the opening try of the game. This was maybe unfair on Shields who had grafted solidly for the full half. HT 0 – 5.

At the start of the second half, Shields were reduced to 14 men when Pete Finlay got 10 minutes for straying offside. This appeared to be a “team” yellow card though, as the referee had warned Shields about infringements building up. Redcar kicked the penalty, 8-0.

With Shields still 5 minutes from getting back to full strength, the Redcar skipper was shown a straight red card for an attempted headbutt. This gave Shields a distinct advantage in the scrums and line outs but again, the Blues were unable to press home their advantage with tries. Gav Duffy did slot an excellent penalty to get the score back to 8 – 3, but then the momentum of the game slipped away from Shields.

Redcar kicked another penalty and as Shields pressed for scores, ran in two late tries. The final score was 23-3 to the hosts, but this certainly did not truly reflect how close the game was. This was definitely a missed opportunity for Shields to secure a good win and as disappointing as it was, there were positives to be taken from the game. The defense in the first half was excellent and the commitment shown by the lads on the day can only bode well for the games coming up.

Man of the match was Ben Marshall, who spent the match putting in big tackles, running the ball and covering every blade of grass. Mention also goes to the front three for some excellent scrummaging and Warren Anderson for his constant sniping runs at the breakdowns.
This week, Shields are at home against Hartlepool BBOB. Kick off 2.15pm.

Meet on time and in polo top.