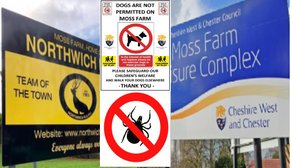 There is evidence of a feeding frenzy of the "Park Bugs" at Moss Farm.
Professor of Entomology Wally Whtty

Officials have confirmed they will have to treat the grass in preparation for next season after the infestation of bugs have started ruining the surface and become a health hazard to domestic pets.

Head Groundsman at Moss Farm, said: “You hear about all sorts of insects eating grass like armyworms, cutworms, sod webworms, white grubs, spittlebugs… and now we’ve got a terminal infestation eating our grass!

“We noticed earlier in the season the grass was disappearing at an alarming rate and now large patches of the pitch are just being eaten in front of our eyes. It’s truly bizarre!

“We’ve spoken to experts and they’ve told us there now a treatment available which has been in development since the introduction of the ground bugs over twenty years ago in 2000.

Northwich introduced the bugs early in 2000 which then met all the stringent requirements of International Rugby Board (IRB) regulations, and Environmental Agencies.

The new species of superbug were developed specifically for grass at the Moss Farm Complex, with strong pincers to deter pets from fouling the grass areas of the grounds and to digest any dog faeces. An added bonus was discovered in early trials as their burrowing allowed rainfall to drain straight through the soil, meaning an end to sodden pitches.

The recent increase of doggers on the Moss Farm site has provided a feeding frenzy for the invertebrates and a resultant population explosion.

We tried blocking the drains over winter hoping to drown the little buggers said a Northwich spokesman but that failed.

Professor of Entomology at Reasheath University, Wally Whitty said: “We’ve been working with Northwich for the last few months to study these fascinating creatures which we have dubbed the “Park bug”.

“The good news is they don’t seem interested in merging with others".

The lawns of the local residents and surrounding sports grounds have little to fear and should remain safe… there is no chance of a repeat of the 2000 Millennium bug spreading!”