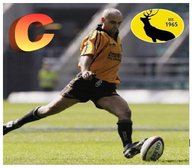 The alphabet with Northwich Rugby

Counter Rucking
If a team (usually the team that took the ball into contact) has secured the ball at a ruck, and the other team manage to force them off the ball and secure possession themselves,

Conversion
If a team scores a try, they have an opportunity to "convert" it for two further points by kicking the ball between the posts and above the crossbar - that is, through the goal.

The kick is taken at any point on the field of play in line with the point that the ball was grounded for the try, parallel to the touch-lines. So it is advantageous to score a try nearer to the posts as it is easier to convert it.

The kick can be either a drop kick or a place kick in the 15-man game.

Or
Conversion:
The situation when a Welshmen remembers that he’s Welsh after he has been ignored by the All Black/Australian/South African/English selectors.

A priest I know has taken up rugby. He’s scored a few tries but hasn’t made any conversions yet.

In 2007 Gary Bell recorded 12 Conversions and scored 3 Tries in a demolition of Duckinfield 99-0 at Moss Farm.

In the same game he missed 3 further Conversions and a Penalty.

The following Wednesday Northwich reached the Cheshire Vase final with a relentless display of total rugby, at Wilmslow 80-0, Northwich never taking their foot off the accelerator.

Gary Bell once again landed 9 conversions, before missing 2 and giving kicking duties to Campbell who converted one.

The following Saturday saw a return to league action with Northwich crowned Champions. The Blacks secured their status in North 2 West with an efficient if not sparkling performance against Aspull with a 21-0 win at Moss Farm.

Three games in seven days 200 points for, zero against.

As we peep out from the oubliette of lockdown, there is an awful lot of pent up jollification out there in our community, due to the virus - and because we have been in and out of the shackles for nearly a year there is an almost certain chance that every member of the club and their extended family has missed out on some celebration over the last twelve months.

As a venue, as a club, we would be absolutely delighted to host your event.

I had a go at rugby the other day….I thought I was doing pretty well but all everyone kept saying was, “Nice try,”

These days we know a try as something that is confusingly worth five points instead of three. However there was a time in the history of rugby where a try was worth, well, nothing. After battling to touch the ball down at the opposing teams end you were given a chance to ‘try’ to score a conversion. Thankfully they made it a little more worthwhile!

England actually featured in the first ever international rugby match against Scotland… and lost, in true English fashion. Scotland won 1-0 by converting an old fashioned try.

Cibi is a Fijian war dance performed by the Fiji national team before each of their international matches.