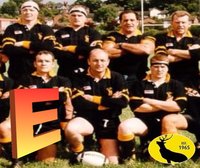 the Alphabet at Northwich Rugby

Rugby Terminology
Egg Chaser (egg chasing)
The rugby term egg chaser refers to 'egg chasing' players who play the game with a ball which is an oval shape 'egg shaped'.

Even though some people see the phrase 'egg chasers' as derogatory, in general it is meant to be nothing more than friendly banter exchanged between different sports fans.

Eighth-man
Alternative name for the Number 8

Engine Room
Another name for the two locks of a team, especially in reference to scrums.

He was on the Sunday Cheshire Plate score-sheet against Oldershaw, along with brother Keith, both registering tries. Mike Penny snatched another with Hudson kicking two conversions. In the second half they cut-loose with further tries from Hudson, Danny Townsend, Rick Dodd and Ian Finn.

The day previous Hudson had a 30 point tally, away at Duckinfield.

Which also brought a second-half, four try haul for eighth man (No8) Ted.

Ear Protection
It has long been the rugby players' curse, but a Northern Ireland mother may have finally found a way to prevent the cauliflower ear.

Brenda Phillips, from Co Down, whose son has played the sport all his life, has invented a silicon ear guard to prevent injury and protect cartilage.

Ms Phillips said: "Cauliflower ears aren't that nice to look at it. But it isn't just about aesthetics, they can be very painful and can also cause ear damage.
"People who play contact sports like rugby and wrestling protect their teeth, so why not protect their ears?" I said, 'In this day and age, why have we not got some protection for our ears?'
"The checks have been done and as far as I am aware there is nothing else like this in the world".

It is patent pending.

Former Ireland rugby international Willie Anderson, who once used leeches to draw out the blood from a cauliflower ear, has welcomed the development.
"I didn't particularly wear a headguard (when playing rugby), I just used a bit of tape," he said.
"This I think will be a fantastic invention for players, anything that can help will be brilliant."

Evocation of the spirits in the clubhouse, a memory stirred from 35 years ago.

Northwich Rugby was still conducting a running battle against red tape at Moss Farm in 1986, as we boycotted the social club over only opening during pub hours (many will not understand such frustration in the modern age of pub opening).

So when we won promotion during that same season we had to go to the pub to celebrate? (I leave you to work that one out).

Eyesight report: I have no problems with being able to see ambulances.

However, I can never spot an ecnalubmA until it's right up close behind me.