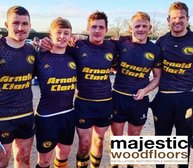 Whilst compiling the series of features “knowing your club” some obvious and interesting information appears, with a fascinating tale which illustrates just how close-knit our community is, a family tradition.

It's a family affair

All of us at Northwich pride ourselves on being first-and-foremost, a family club!

It's a place, a community, an organisation for all.

We would not survive without the countless families who do so much on and off the pitch.

Their selfless efforts are the fuel which drives us forward on a daily basis and together, we look forward to a bright and exciting future.

Recently Eddie Jones predicted that back-rowers and centres will become interchangeable in the near future, using England star Tom Curry as an example of an all-round athlete capable of making such a switch....

Over the last 5 seasons Eddie need look no further than Northwich RUFC.

The current squad at Northwich includes Chris Dale, Chris James, Sam Naylor & Richard Dale, who all feature in the series, but in which position is yet a mystery.

Collectively they have all played both as forwards and backs.

Covering as either, full-back, wing, centre, stand-off, scrum-half, No 8, flanker, second row, hooker, prop and even getting splinters on the bench.

All four came through the Northwich junior section, prior to following in their fathers footsteps, who were all ex-first team blacks.

And all 4 have been involved as coaches in the SuperStars section as their fathers before them.

We also have brother and sister playing in the juniors, current senior players with sons in the juniors and numerous ex-players on the sidelines and coaching ranks proudly watching their offspring run around in Northwich colours.

Add to this the volunteer coaches, managers, committee members and supporters who have sons or daughters playing and you have a real family affair

The Club's most impressive set of family connections would have to be Naylor, Dale, Burmah, and Mills.

They are all still involved in the club and you will often see the supporting cast on the sideline at home games.

And there is always a twist as coffin dodger Dave Frazer frequently says to young Daley “who’s your daddy”.

A genealogist would have his work cut-out tracing the family lines of descent running through Northwich RUFC.