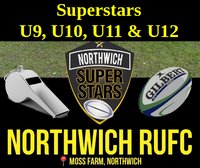 NRUFC U9s In the Under 9s we have made the transition from tag rugby into contact but despite the break we have seen a great squad of children training and playing with us this season.

The direction from the RFU was to stage the transition to tackling so the first part of the season we continued with tag rugby. Our first tri- tournaments demonstrated the best values of rugby and performed outstandingly. Our home festival was equally successful in April with another three teams competing and rounding off our season of tournaments.

The U9s have played some exhilarating rugby this season, scoring fantastic team tries and breathtaking individual ones. Their attitude, enthusiasm to go at teams and determination in really tough matches to come out on top. They listen and work as a team, their camaraderie and most importantly they play with a smile on their faces… they are a credit to the club.

Our coaches enjoyed running sessions and inspiring the next generation of Blacks First Team players. The Under 9’s coaching team give massive thanks to Mums, Dads, Grandparents, and carers for braving all conditions to watch and support the squad.

The coaching team have loved every minute and we look forward to next season in the Under 10s.
Coaches Chris & Jon

We’ve had new players join us, with everyone bringing something different to the squad, and it has been that diversity that has really helped us develop this year. It has been good to get back to festival life again, especially since these are our first since moving into full contact rugby.

Our first festival was a sunny Autumn Day back in 2021 where we embraced the game and our age grade rules fully with everyone having a fantastic time. We have been mascots and had many joint training sessions with other clubs locally, which has been fantastic for us and helped us to develop our game further. We’re very much looking forward to taking our squad forward into the new season as U11s.

A highlight coming at the end of season team bonding water-sports which was thoroughly enjoyed by all.
Coach (wish I was) Rich Dale

After the last couple of 'covid' seasons it was good to get back to proper training. The Mighty young Stags trained hard, played hard but most importantly had a lot of fun!

We attended a few joint training sessions and hosted a few ourselves which gave them invaluable experiences. The festivals we played in were so much fun and the players really enjoyed getting back to playing games after the hiatus of the past couple of years.

We are so proud, and it’s been an absolute pleasure coaching again this season. They are a talented group of players, and we are really looking forward to next season to continue all our rugby journey’s.
Coach Sam