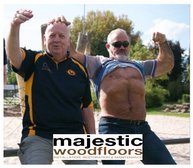 At Majestic Wood Flooring, our team have over 20 years’ experience and knowledge in Floor sanding & Restoration
Gary at Majestic Woodfloors

Today, we look at the bedrock of any team, the prop forwards.

Loose-head and Tight-head Prop along with the hooker, make up what is known as the front row of a scrum.

To be successful, both props must be extremely strong and should relish head-to-head competition.

In the lineout, props should be able to support or lift the jumper.

Away from set pieces, props help to secure the ball when a player has been tackled, or receiving short passes and hitting the opposition defence at pace in an attempt to occupy the defenders.

They are supposed to push in the scrums.

Previously it was not essential for them to touch a rugby ball, and there are quite a number of cases known of props who have completed successful careers without ever touching the ball.

Without a doubt the manliest men on the pitch.

Large, often hairy, beer-swilling carnivores that can and will smash anything in their path.

Accused by some of simply being dumb, I prefer to think of this group as “open to unconventional ways of thinking”.

A selection of players has been picked for your delectation and interest.

Joe Maddocks a popular member of the club, Joe is a no-nonsense, no-frills forward.

Never one to take a backward step, his work-rate is admirable and a solid and reliable defender.

He began his rugby at Northwich in the U10s before joining Chester juniors, returning to play with our 3rd in 2013/14 prior to making his 1st debut v Sefton in 2015.

Tim “Trog” Wilding his brash character makes him stand out as one of the first club legends.

He is perhaps the most celebrated forward to come out of the club.

That may sound like a bold claim but it is based on fact.

Tim started his rugby career in the lower teams rapidly rising through the ranks where his career flourished.

He went on to establish himself in the first team as an uncompromising prop forward and captained the side.

Tim represented Cheshire and moved onto Sale before returning back to his old club, once again taking on the captaincy.

Tim coached both Colts & Senior rugby at the club and been an ever presence at the Northwich Festival.

Jan Cartman joined from our neighbours, another ex-captain who led by example and was a regular in the team for many years, a model of consistency and did a lot of the unglamorous tasks that are often unnoticed by the untrained eye.

Jan was in his 10th season at Northwich when stepping out at Twickenham for the EDF Cup victory.

Now classed a veteran he scored his latest try against Christleton 1st playing for Northwich 3rd followed by a 1st team appearance from the bench only last season.

Steve “Donk” Miodonski played for Northwich during the 1970s / 80s, strong as an ox, a master in the dark arts of the front row.

Donk excelled in the Cheshire Cup competition appearing in our first outing in the competition v Old Parkonians in 1975.

Playing in our first visit to Douglas on the Isle of Man.

And staring in what was probably his most memorable game 12 February 1984.

Not only dominant in the front row, it was Miodonski’s slight of hand pass which led to the try, being the deciding factor of a Northwich victory in the first ever local derby fixture.

Well worthy of a shout are Nick Blake, Chris Birdsey & Andy Cornes amongst many others.

Next week we cast an eye over the "Hooker"