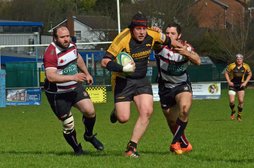 This week we tried various technologies to catch up with seaman (occupation, not nick-name) Richard Llyod, semaphore failed as did light signalling as I discovered I'm dyslexic with my dots and dashes.

Eventually Zuckerberg came to our rescue,

Career: 20 years at Northwich, from under 9s played for every team since even the 5ths when they appeared for a week.

Favourite moment – Beating Liverpool Uni Veterinarians at their home ground in front of a crowd that no 2s game could normally expect.

And in the last minute Hart's try.

Worst – First team debut against Walsall 90-10 in the snow.
Or
Any loss to park or retirement.

Funniest- Caldy away and paying little attention, stood behind the try-line waiting for their kicker to take a conversion, and the ball hitting me full-on in the face.

Sporting idol: Johnny Wilkinson – Consummate professional would be interesting to have a chat to.

Advice – It doesn’t matter how bad everyone thinks you are keep working and eventually you will surprise people or prove them wrong.

I’m a seafarer you cant expect all of my guests to play rugby.

On the table would have to be Spaghetti Bolognese . Only thing I can cook in appropriate volume for that crowd.