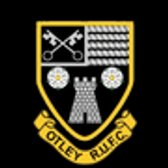 Relegated at the end of last season, Otley have a new head coach in Kyle Dench.
According to their website, they are currently running just two senior teams.

Otley RUFC formed in 1865, but broke away from rugby union in 1900 to become a rugby league club.
They disbanded in 1906, and reemerged as a union club the following year.
Now one of the most distinguished clubs in the country, their first XV has played at the top of the National Leagues for more than a decade.
They can also boast of several internationals that started in their junior section, including Nigel Melville and, more recently, Danny Care.

Old Grovians RUFC will share Otley's Cross Green home from the 2020-21 season.
However, as part of the club's 2025 Vision, land on which the ground is built will be sold to finance a relocation to a site 500m away that will form a community hub.
A planning application is expected shortly.
It means Otley will be nomadic from the end of this season, if we get one, until the new facility opens.
On the pitch, the West Yorkshire outfit has added Callum Irvine (Darlington) and powerful number eight Tom Cummins from Bradford & Bingley.
The latter is a strong ball-carrier, scoring 49 tries in 122 appearances for the Bees.