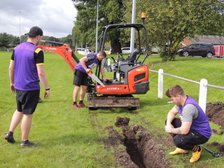 Northwich get ready for sport’s comeback with NatWest RugbyForce

A small group of volunteers completed the first stage of a larger project to improve drainage from the playing surface as part of NatWest RugbyForce.

“We achieved what we set out to and that was to make a good start,” said Steve Lander, facilities director at Northwich.

“It’s a considerable job, and we’ll resume work again in the coming weeks once we’ve assessed what we need to do next and how to go about it.”

Launched in 2008, NatWest RugbyForce is a nationwide programme developed in partnership with England Rugby – the game’s national governing body – that encourages teams to get their grounds ready for the sport’s return during the off-season.

Northwich, one of more than 800 clubs that took in the biggest edition to date of the initiative, received a £500 grant to pay for materials they used.

Additional planning was required to make sure labour was carried out safely, following the latest Government and RFU guidelines for group activity.

“Rich and his band of helpers made a huge effort,” said Lander.

“They’ll be looking for others to lend a hand when we move to the next phase.”

Blacks have focused attention on the field to reduce the risk of not being able to play on it when the weather is wettest during winter.

As a regular host for junior tournaments and festivals organised by Cheshire RFU and neighbouring schools, the newly-promoted North Premier club wants its youngest members to benefit from upgrades to facilities.