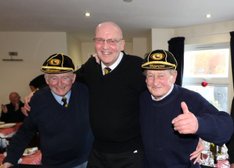 Roger Blake and Ron McLaverty were made life presidents of the club.

Caps were awarded, at a presentation ceremony before the game against Macclesfield last Saturday.

Roger and Ron are now the initial members of the life presidents’ group. To qualify for inclusion, an individual will have given exceptional service or support to the club over a prolonged period of time.

Numerous plaudits were rightly received by both recipients during the Christmas lunch presentation that was held to mark their many years of dedicated service, but only a few know the full extent and depth of their commitment to the club.

Former Captain, Chairman and Mayor of Northwich, Councillor Sam Naylor, introduced by Club President Colin Johnson, spoke highly of the commitment and the longing legacy of both Ron McLaverty and Roger Blake.

Ron McLaverty’s link to Northwich Rugby was first forged more than four decades ago. He watched a match for the first time shortly after moving to Wincham in 1974.
“I remember it” he said, “I’ve known most of the stalwarts here since they were young guys. And I feel fortunate to have met some great people along the way”.

Ron, has served as secretary, main sponsor and president, more recently as the club celebrated its first 50 years during 2015/16, Ron was elected Chairman, a post he held until 2017.

Ron was pivotal in pioneering the Northwich Festival which became the financial life blood of our club for many years.
“We are greatly indebted to Ron for his contribution in helping to establish the club as it is today.”

Sam then introduced former Head Coach Roger Blake. He said “If there was one event that pin points to the rise of our club, initially as Mid Cheshire College, now Northwich, was the appointment of Roger Blake as head Coach in the 1979/80 season.

Roger Blake was a lecturer, from Sir John Deane’s GS, who took charge of coaching in 1979. This was probably the most significant milestone on the field in the club’s history.

Roger brought an air of authority to training, giving structure and a relentless obsession to completing the basics of catch, straighten, pass and move. Perfect these and opportunities to score will follow, was a creed he always stuck to.

“I’m sure we all agree that we are where we are today because of the massive influence Roger had on the field, and he laid the foundations for future success the moment he arrived.”

Roger has also served as a representative of the club on the Cheshire RU Committee for many years and was President of our Club for several seasons before retiring from the role last season.

Both members were made Life Members of the Club and were presented with specially produced caps in Northwich colours of black with gold trimmings and with their names embroidered on.

It’s fair to say that Northwich Rugby has played a significant part in their social life, too, and both are very proud to see the club’s evolution and development on and off the field.

We acknowledge the commitment, time, expertise and sheer bloody hard work of all those who have contributed, and continue to contribute, to driving Northwich Rugby forward.

Thank you from us all.