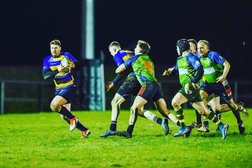 Northwich star invited to tour with the British Lions

WILL Du Randt has been invited to play for British Police Rugby when they tour South Africa next summer.

The Northwich centre, a regular for Cheshire Police’s representative team, could feature in two curtain-raisers for the British and Irish Lions – who will be in the country at the same time.

He made his debut for the British Police in February of this year when they registered a 29-17 victory over the RAF at East London.

Will’s bow for Northwich was on the opening afternoon of the 2016-17 campaign, and he wasted no time opening his account for the club when he touched down seven days later in a 30-13 home success against Rochdale.