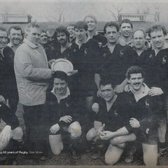 Players from the Past: Rick Dodd

A legend from the archives.

The club has had the privilege of fielding several excellent centres over the decades since we formed in 1965 as Mid Cheshire College.

One of the first stalwarts to star at Inside Centre, traditionally the first three-quarter player to receive the ball from the Stand Off, is Ricky Dodd.

Not only was he superbly fit, frequently seen jogging all the way to Barclays Bank, Radbrook Hall, near Knutsford, and back again, other times biking the distance.

Rick was sharp and dangerous, had an eye for a gap and was a good organiser and communicator. His passing game was excellent as was his defence. He had a different persona on the field than he did off it with a physical approach to the game which complimented the more refined approach he employed off it.

He relished the physical aspect of the game but could also step off both feet, another speedster, scoring plenty of tries during his blacks career. Rick was also a solid defender and was a more than capable player in all respects.

Later moving to play flanker for the Blacks, always in the thick of it, most weeks he somehow ended up with a cut head.

He was a leader on the field and went on to be a very successful 1st XV Captain two years running under Coach Roger Blake. Ricky formed a formidable partnership with Chris Nixon, helping the club win it’s first official silverware, the Cheshire Plate in 1989.

It was the first major trophy the club had won and they did so with a thoroughly committed performance based on superiority in the pack. Having beaten Oldershaw earlier in the season by 40 points it was important college struck the right attitude.

Confirmation they did after 10 minutes Ted Harrison made the break for Dave (Squirt) Johnson burst through the defence and score a try. Oldershaw continually struggled in the scrum which led to a further penalty try. Ian Finn recorded two second half tries before Peter Hudson sealed victory with a massive penalty on 70 minutes, final score 23-7.

Rick left the club before retiring to the South Coast.