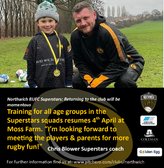 'RETURNING TO THE CLUB WILL BE MOMENTOUS'

A catch-up with Under 9s coach Chris Blower as we get set to be back at Moss Farm!

The return of rugby to Moss Farm will be ‘momentous’ according to Under 9s coach Chris.

After nearly three months in lockdown, training for all age groups in the Superstars Squads can resume from April 4th, and Chris cannot wait.

Speaking about the prospect of getting the lads back as a group, Chris beamed: “Getting the players together will be fun. The reaction to them going back to school has been incredible, but returning to the rugby club will be momentous for many.

“I’m looking forward to seeing the players, coaches and parents, and finally getting back to almost normal.

“While we did some training over the Autumn, we have not played other clubs for more than a year. Playing in festivals again will be great, but I suspect that we will be a little way off.”

In unprecedented times, Chris was quick to pay tribute to the amazing effort of the junior Stags in sticking together and continued: “While Covid has been incredibly hard, everyone has tried to stay positive and active.

“The communication at all levels has helped keep people interested and keen. In fact, we have already had a number of new players look to join us, which is very unusual at this time of the season.

Let’s hope we have seen the back of Covid and the associated restrictions and we can enjoy a significantly extended season in the sunshine.”

He added: “During lockdown we’ve had numerous activities”.

Reflecting on what the kids might have missed the most in this most bizarre of times, Chris said: “Each other, and in many cases the physical release of charging around the pitch with the ball.

I have been taking Alfie to the park with a rugby ball a couple of times a week and he is desperate to get stuck in again.”

With the hope of extending the season into the summer, Chris also revealed what he hopes the players can achieve in the coming months, stating: “Ideally getting all our players comfortable with tackling. They were making good progress, but they have done virtually no contact for over a year.

Some will find this easy, but others will need a bit more coaching. But initially we will still be subject to some restrictions.”

Lastly, Chris revealed what the first return will be mean to many at the club – and what he is looking forward to in the long run.

He concluded: “It will be like a socially distanced reunion, and when we get the chance, watching the first team play with a supporting cast of Superstars Mascots will be incredible.”