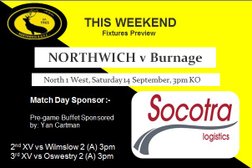 A shaky start and a growing absentee list of players is having a knock-on effect for all teams in the early throes of the season. However DoR Postie and his coaching team remain upbeat, they were pleased with the display against a side who we had three close matches with last season. The new players all fitted in well but there is still have plenty of room for improvement. Following defeat at Birkenhead Park, scoring four tries against tough opposition away from home shows ambition to play exciting attacking rugby, but only gaining a losing bonus point is little recompense.

14th Sept. Did you know? Asteroid 2000 QW7 will approach towards Earth today. The 2,133 feet space rock is currently traveling at a speed of 14,361 miles per hour. And on the night of the 14th during the 2011 world cup England players attended the “Mad midget weekender” at the Altitude Bar (it is believed the midgets did not reach such speeds when launched by Ashton & Hartley).

Northwich host Burnage at Moss Farm, jovialities commence at 1.15pm guests and supporters are invited for a free pre-game buffet with kick-off at 3pm. Burnage opened their season with a Lancashire Cup fixture v Widnes, who put in a performance to see off the challenge of high flying Burnage a talented side from a higher level who were well drilled and structured (29-22). Last weekend Burnage pushed Wilmslow to the limit, both sets of supporters went through the proverbial wringer before Wilmslow staggered to the narrowest of wins. As the game entered its final phases, they had several opportunities to close it down but a turnover at the breakdown, from which Burnage broke away for their final score, a forward pass and then a dropped pass in the final lineout all conspired to give Burnage the chance to snatch a last gasp winning try before they too knocked on and a relieved Wilmslow booted the ball out of play for no side (36-32).

It’s early days yet in this league so it’s too early to judge the respective merits of sides. Burnage only just avoided the drop last season but on this evidence they look a decent well organised side. Since Northwich’s return to North One West they have not lost to Burnage at fortress Moss Farm, Saturday should see a terrific and entertaining game of rugby.

Northwich 2 visit Pownall Park home of Wilmslow 2. Wilmslow had a comfortable away win 5-45 last week at Anselmians, whilst Northwich suffered a crushing defeat to Widnes 2 at mossy 5-58. Wilmslow 1st squad have recruited well during the close season so its no surprise their 2nd team will be stronger as they have strength in depth across their senior sides. In comparison Northwich have suffered injuries and player availability which has impacted early team selections. Saturday is sure to be a test of resolve.