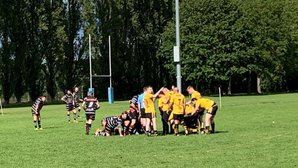 After not having a game for a couple of weeks due to no referee or struggling for numbers. Northwich played Christleton 1s at home hoping to put on a better performance than they did in the first game of the season.
The blacks started the game well putting in a lot of big tackles to defend their own line which Christleton found hard to break.
Northwich’s first try came from a great run by two players. Matthew Parkinson ran from his own 22 and passed the ball to forward Chris Eyres just inside the opposition half who ran in the corner.
2nd try came from an even more spectacular effort from Jack Owens who had been on the field a matter of minutes. He picked the ball up on his own try line and ran the length of the field to score under the post which was converted by Sparkes
3rd try came from the returning prop Yan who bulldozed his way over after receiving a short pass from Oli Sorensen.
Northwich improved massively but still came up short as injuries to Nemo,Sparkes and Goodfellow in the 2nd half proved costly as did the sin bin for Yan.
Big congratulations have to go to Christleton’s number 14 who proved he is good enough to get into most 1st teams that we’ve seen.
More recruitment will be needed for the Northwich 3s to try and put a strong squad out each week with players having work commitments and injuries.