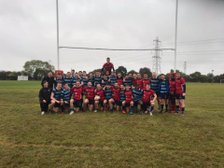 Medics started with great intensity from the kickoff, with the best initial defensive structure we’ve seen so far this season. Solid tackling from Fabian Rigby and Will Tremelling halted repeated Norwich union attacks. However, over time, the opposition were able to make their way up the pitch and slide one in the corner.

Tom Ritchie was consistently able to slot the ball where we required it- in both the kick off and penalty advantages. With lapses in concentration and limited communication, our drift defence was lacking and Norwich we able to score a further try. As well as this, despite a string of perfectly legal jackling attempts (which the ref was having none of), NU put more points on the board.

Shortly before HT, Jason Philip made a cracking tackle by yeeting their man into touch, but battered his own shoulder in the process.

We started losing depth in our attack and allowed Norwich Union to really pressure our boys in the back line, disrupting any chance of us playing fast paced running rugby. Will Burton managed to weave between their big boys in the backs to dart through their line and score our first try.

With tensions rising and the infringements increasing on both sides, the game subsequently slowed to a crawl. This favoured our opposition and enabled them to score more points.

About 20 minutes after half time, Matt Boughton left the field to the sympathetic applaud of the opposition as they thought he’d broken his ankle- when in fact he just had cramp. Thomas Wermter, now covering the 10 spot and finding his fly half boot, made us considerable distance up the pitch; but we were unable to capitalise on the advantage and our lineouts let us down.

We can learn a great deal from this game. More than anything, there were moments where we bonded well as a group and allowed individuals to shine. The only way to improve on this is to get down as a team on Wednesdays and train together as a squad. I’m sure everyone will agree that it was a disappointing result- but still a laugh with a great group of lads.

MOTM- Will Burton- ran some impressive lines in attack and got a well deserved try
DOTD- Jason Philip- for getting injured and hurting his shoulder along with the associated cramp that we love and have all come to expect.
DOTD- Matt Boughton- an impressive ‘Marcus Dyer’ cramp caused him to have to leave the field but really he had to consume for his incessant ability to start a scuffle on the pitch.