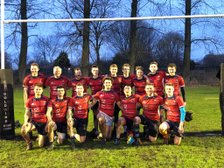 Medics began with high intensity and great speed from the kick off. Good work around the rucks by Carwyn halted the initial Beccles attacks. Repeated ill discipline by the opposition meant that medics began to take the advantage at the cost of a slower pace. A Beccles yellow card combined with faultless kicking by Louie Cooke enabled us to capitalise on the situation, and make significant meters. Louie was soon allowed to successfully go for posts and put medics 3 points up. We battled hard for the next 25 minutes as Philip Ascough jackled multiple balls from isolated attacks and Louie took crippling hits with ease. Will Burton did exceptionally well to cover the back and high ball as HT came with medics leading 3-0.

The next 40 minutes saw the tight 5 work tirelessly in the scrum and Gareth made good ground with ball in hand. Adrian, ever-present at securing our place in the rucks, worked wonders with Taigh, who exploited on the opportunity to run a multitude of black balls- all of which came to great effect. We became more focussed in attack as Declan made a notable impact and led from the front.

Our defence held out against an impatient opposition as Ben McCartney put in some big hits to put us once again on the front foot. Fabian showed his true colours as a part-time cage fighter, only for the ref to put an end to the 30 man scuffle. Despite this, and after overwhelming sustained pressure within our 22, Beccles were able to put some points on the board by scoring and converting a try- making the score 7-3 to Beccles. Hajin put his body on the line throughout the match (seriously look at his noggin) and inspired the pack when the game seemed to turn against us.

The last 10 minutes highlighted how close the game was and acted to spur us on, pushing us further up the pitch. Tireless picks from the ruck, only 1 meter from their try line couldn’t seem to break through, but instead pulled Beccles players in from the peripheries. Acting on this, the backs yeeted the ball wide to Seth who crashed over to score in the corner- with only 2 minutes to go.

It was a great show by all the boys today and we thoroughly deserved the win.

MOTM- Seth Forster: for reading the game well and being in just the right place to score a much needed try.

DOTD- Declan Wolverson: despite a great game and a bossing the attack like a true 9, his unfortunate slice of the ball (when we desperately needed touch at the end of the match) meant that he had to consume.