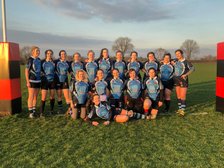 A wintery afternoon at Wymondham

On a rather chilly afternoon we took to Wymondham for our second fixture of the season against them.

As we settled into the first half of the game our comms improved and we were working together as a team to get to where we were needed on the pitch. Some strong, powerful breaks from Wymondham led to most of their tries in the first half.

We came together after half time with our heads firmly in the game. A scrum following a knock on at the restart led to some great handling by the backs, a loop between Emma and I which was shipped out wide to Claire. Claire fended off several of the opposition to score our first try between the posts, which Georgia then went on to convert. We had much more possession in the second half of the game with a lot more play in their half. An incredible offload from Georgia out to Claire led to our second try. Unfortunately the game was called a few minutes short due to injury but we had a fantastic game and I’m very excited for us to continue to to see these improvements through the rest of the season.