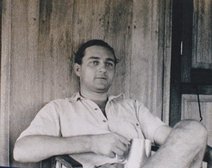 William Percy Harvey worked at Norwich Union for a while during the 1930s, before heading out to Malaya just before the outbreak of the second world war to work on a rubber plantation. As a member of the Malayan Volunteers.

Bill had taken part in some of the most extraordinary guerrilla actions of the war in Malaya. During a period that became known as the ‘Mad Fortnight’, he and two other members of “ Left Behind Party No 1” created mayhem along the Japanese lines of communication. In time, they would be credited with derailing no fewer than seven trains, damaging or destroying some 40 vehicles and inflicting anywhere between 500 and 1,500 casualties. He was subsequently captured and sent to Pudu Jail. After months of planning Bill and eight others managed to escape. Sadly after eighteen days they were betrayed. They were returned to prison, shackled and placed in cells until one day in September they were led away to a truck, driven to a nearby cemetery, told to dig their own graves and shot. He was mentioned in dispatches.