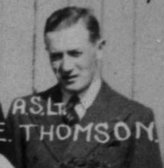 John Chute (known as Chute) Thompson worked for The Norwich Union Life Insurance Society at Head Office, Norwich. He was a member of the Agency, Powers and Foreign Departments. His rank and unit are given as Sub Lieutenant, Fleet Air Arm Royal Navy, 825 Squadron HMS Daedelus. Chute was mentioned in dispatches and escaped when H.M.S. Ark Royal was torpedoed and sunk. In February 1942 when the German battle cruisers Scharnhorst and Gneisenau, together with escorting ships, made a dash through the Channel from Brest he was leading pilot in the second flight of three Swordfish aircraft sent on a suicide mission to prevent the ships escaping.

All the old fashioned Swordfish planes were shot down by German fighters and of the 18 men in the crews only 5 returned:
"the last that was seen of this gallant band, who were astern of the leading flight, is that they were flying steadily towards the battle cruisers led by Lt Thompson. Their aircraft shattered, undeterred by an inferno of fire they carried out their orders which were to attack the target. Not one came back. Theirs was the courage which is beyond praise."

Additional Information: Son of Chute and Eleanor Maud Thompson; husband of Claire Joyce Diana Thompson, of Southampton.
http://www.bbc.co.uk/history/ww2peopleswar/stories/88/a6237588.shtml
(Full account of the action in which he was killed)