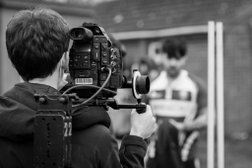 used as a film location

It may surprise you to know that the Rugby club was used as a film location last week!

Ashley Foster, a new member this year who’s played a few games for the Firebirds and his fellow students spent three days at the club filming as part of their final year studies.
Here’s a synopsis of the short film they shot :-

An aspiring rugby player, struggles to coincide life with his mental health struggles and insecurities, having his aggression build through rugby, he is challenged through his approach to regress.

Ashley’s role was Writer/Director a role he explained in his own words “I wanted to create this film to help those with mental health and insecurities within a high-octane sport like rugby, to open up and share their thoughts and struggles, creating an open environment to explore the male mental health issues we face in society. Being able to develop my own personal thoughts and experiences into a sport that I love to watch and play, also being able to share that with others is what really drove me to create this idea.”

Despite this project being part of his studies with the film equipment being provided the project still cost the students, so if you are able to add to the coffers of their go fund me page, I’m sure the producer Joanna, Ashley and the rest of the fellow film crew would be very grateful. Link here :- Controlled Aggression (A Short Film) (gofundme.com)

We all look forward to seeing the end result when editing and postproduction has completed.

So, watch out for more news on that soon.