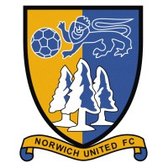 The Club was founded in 1903 as Poringland and District F C as a village side 5 miles from Norwich.

Continuing success forced the Club to move to the Gothic Social Club in Norwich for the 1985/86 season, a campaign that saw us lose 4-1 to Norwich City Reserves at Carrow Road in the Norfolk Senior Cup. A year later we reached the final again only to lose yet again 2-1 to Great Yarmouth.

In 1987 the Club changed its name to Norwich United and Paul Chick was appointed manager. In his first season we finished runners up in the Anglian Combination Premier Division, the following season we won the coveted Sterry Cup.

Norwich United joined the Jewson League Division One in 1989/90 season and finished runners up. Unable to be promoted due to ground facilities we won Division One the following season and moved to our current ground at Plantation Park for the 1991/92 season in the Premier Division. We finished 5th in the league and surpassed our ambitions by winning the Jewson League Cup beating Gorleston 5-2 after a 2-2 draw at Carrow Road.

Season 2001/02 was to prove very memorable, for after spending some time back in Division One, Paul Franklin in his first season as manager assisted by Donny Pye won the Division One title and lost to Clacton in the semi-final of the League Cup. So once again Premier Division football was back at Plantation Park.

Season 2005/06 saw The Planters reach the Final of The Norfolk Senior Cup at Carrow Road, only to lose 1-0 To Dereham Town.

In October 2012 Damian Hilton was appointed first team manager. In season 2013/14 Damian brought in John Edridge as his assistant and first team coach, in their first full season together The Planters reached the last 32 in the FA Vase and 6th place in the Thurlow Nunn Premier League.

Season 2014/15 saw the Planters reach the last 16 in the FA Vase and for the first time in their history win the Premier League Title and were winners of the League Cup completing a memorable double a massive achievement for Damian & John.

Season 2015/16 saw us retain the Premier League Title a massive achievement from the players and Manager John Edridge assisted by Steve Eastaugh and Darren Plowman.

The Club owes much of it's success to the continuing support of Club Chairman Mr. John Hilditch, President Mr.Michael Miles and Vice Chairman Mr. Peter Bowyer.

Our thanks go to HILDITCH HOMES & DYNO-ROD the professional drain specialist for their continuing sponsorship of the football club also new sponsors for 2014/15 season MACRON STORE NORWICH, their showroom is based at Plantation Park.