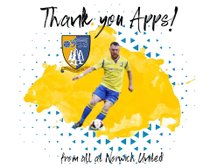 Norwich United would like to place on record our thanks and best wishes to Sam Applegate and Shaun Wones who have both made the decision to leave the club this week.

Shaun Wones will be retiring from playing with immediate effect, while Sam Applegate will be looking for more regular first team football with Norwich CBS.

Both players have served Norwich United with distinction, have been popular members of the club and influential in the changing room.

Shaun Wones first signed for Norwich United in 2016 and went on to play 90 games in all competitions over 2 seasons, at a time when The Planters were competing in The Isthmian North (Step 4). Shaun scored 7 goals in his first season and went on to help Norwich United to win their first ever Norfolk Senior Cup in 2018, before leaving to join Norwich CBS.

In 2020, as Steve Eastaugh returned as Norwich United Manager, he brought Shaun Wones back to the club to resume their positive working relationship from two years previously. Upon returning to Plantation Park, Shaun took up the role of player/coach, assisting the manager and coaching team while playing a variety of roles on the pitch.

This season alone Shaun has played as a Striker, Central Midfielder and Centre Back, showing his willingness and ability to play a number of roles across the pitch. A strong competitor, Shaun could always be relied upon in the air and had good positioning and passing skills, using his experience to guide the younger players around him.

Sam Applegate signed for Norwich United in 2017, making 115 appearances for the club in this time. Starting off in The Isthmian North in his first season, Applegate helped The Planters to win The Norfolk Senior Cup in 2018.

A combative central midfield player who always caught the eye with his determined attitude and team ethic, always looking to back up and support his teammates, particularly in physical confrontations! While Sam Applegate has a particular talent for winding up opposition fans and players, he is also a player who plays with a smile on his face and seems to be the life and soul of the dressing room wherever he plays.

At Thurlow Nunn Premier level Norwich United won well over half of the games Sam Applegate played in and he became a firm fan favourite with the Plantation Park regulars during his time at the club. Sam became vice-captain of Norwich United in 2020, and will be missed by everybody at the club.

Norwich United Manager Steve Eastaugh was the man who first signed both players during his first spell as manager of the club and clearly has a lot of time for both individuals, having re-signed Shaun Wones at the outset of his current tenure and also making Sam Applegate vice-captain at the same time. Steve had this to say regarding the popular pair’s departures:

“Both men have been tremendous servants to our football club. Sam was very honest in that he felt he could no longer push himself to the levels needed to get in our side and that stepping down a level would be the right thing to do.

Shaun is older and although physically fit had become mentally tired, which considering our schedule is understandable and Shaun has therefore taken the decision to retire from football.

We have a lot of time for both and we are very lucky to have been the beneficiaries of their hard work for so long. We wish them well and they will always be made welcome at Plantation Park.”