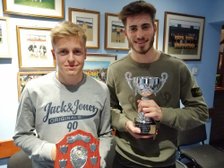 Reece Crowe has been awarded the Under 21 player of the year shield. In what was a difficult season for the side the, 17 year old left back was a regular in the starting XI making 29 appearances and was the leading scorer with seven goals.

Finn Kelly lifted the U18 player of the year trophy. The 17 year old made 15 appearances giving real stability at the heart of the defence and scored two goals and ended the season as captain, as the young Planters finished a very creditable third in a very competitive campaign.

The club would like to thank Vice Chairman Peter Bowyer and outgoing Secretary Norman Bygrave for providing the two trophies.