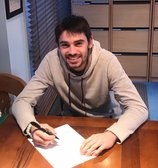 Pre-season has got off to an excellent start with five senior players signing new contracts keeping them at the club until 2020.

Luke Pearson signs having had a very impressive debut season in goal, chalking up forty-two appearances after arriving from Kings Lynn in the summer.

Also putting pen to paper, Haydn Davis, who continues to impress netting five goals in twenty-five games and Dillon Alexander, who, since Christmas, has forged a very solid midfield partnership with Fan's Player of the Season Sam Applegate.

Captain and Committee Player of the Season, Andy Eastaugh, a rock at the back yet again, and a threat from set pieces, bagging four in thirty-nine games signs a new deal along with full back Harry Barker who who notched up thirty-six games chipping in with one goal.