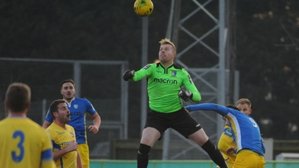 Wilton back at Plantation Park!

Norwich United are pleased to announce the singing of goalkeeper Andrew Wilton.

Andrew first signed for The Planters at the end of 2015-16 season after promotion into the Isthmian League Division One North was secured.

In his first season, Andrew made 45 appearances, including a string of impressive displays which helped The Planters finish 9th, just missing out on the play-offs by a single point.

Andrew went on to make 42 appearances in the 2017-18 season and was in the team that was victorious in the Norfolk Senior Cup, coming from behind to beat Downham Town 4-2 in the final at Carrow Road. Sadly, after a very slow start to the season, the Club were relegated from the Isthmian League Division One North by one point.

At the end of the 2017-18 season, Andrew left Plantation Park moving to Bowers and Pitsea. In his first season, Andrew made 48 appearances going on to keep a staggering 25 clean sheets and helping his new club win the Isthmian League North. Not surprisingly, he was named in the team of the season and won 3 golden glove awards during the season.

“It’s brilliant to be back at a fantastic club and when Steve called me to come back it was a no-brainer as I have worked with Steve at Neots and Norwich previously. I look forward to when the season starts and to get this fantastic football club into the Isthmian League North once again where it belongs.”

On signing Andy, manager Steve Eastaugh said, "Andy brings a wealth of experience and is a great addition to our group. We have trust in his ability and he will give Ryan healthy competition and support."

Make sure you sign-up to receive our weekly newsletter and notifications of any transfer news, events and fixture announcements.