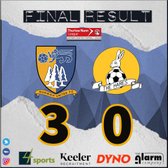 Norwch United lined up against March Town at Plantation Park in their third league game of the season, following their first win of the campaign in the FA Cup the previous Saturday. Planters had managed just a point from their opening two games so were keen to take the game to their Cambridgeshire based opponents who were promoted to the Thurlow Nunn Premier Division in the summer.

Planters started the game in a 4-3-1-2 formation with Ryan Dickerson behind a backline featuring Harry Barker and Mac Gee as full backs with Dillon Alexander partnering Captain Sam Watts in central defence. A midfield three of Max Melanson, Kyle Richardson and Shaun Wones, making his first appearance of the season following a suspension, had Jordan Forbes in front of them in an Attacking Midfield role while Jaiden Snelling started up front with Liam Jackson.

At times Norwich United switched to a 4-2-3-1 formation allowing them to mix up their play and leave the opposition unsure exactly who to mark and where to position themselves. While March Town did force Ryan Dickerson into a couple of good saves in the opening minutes of the game, it didn't take long for Norwich United to take control of the game with their midfield keeping the ball well and ensuring much of the play was in the away side's half. Kyle Richardson launched into a jinking run on 25 minutes, before teeing up Max Melanson to fire The Planters into the lead.

It was Max Melanson again who doubled the scoreline for Norwich United, just on the stroke of half time with his second goal of the match and third of the season. The new signing from Thetford Town has a reputation as a dead ball specialist and showed why, as Kyle Richardson and Melanson both shaped to take a free kick on the edge of the March Town, it was Melanson who ran up and placed the ball expertly into the top right corner of the net.

Norwich United continued to control play in the second half and never looked in serious danger of conceding, they also had plenty of chances to increase their lead. On 70 minutes, Planters Manager Steve Eastaugh made his first substitution of the game with Haydn Davis making a welcome return to the side following a disprupted pre-season, coming on for Kyle Richardson who had probably his most impressive game in a Planters shirt so far. Alby Matthews then entered the fray in the 80th minute in place of Max Melanson who also excelled up to this point.

Jaiden Snelling was a constant threat to the March Town defence with his direct relentless running at players causing mayhem on several occassions. On 83 minutes another of these dribbles led to Snelling assisting Liam Jackson to score Norwich United's third and final goal of the game. A couple of minutes later Snelling was taken off the pitch and replaced by Lennie Blythe but like the other players subsitituted, being taken off was certainly no reflection on his performance as Snelling was very effective and worried the opposition throughout.

Norwich United will be delighted to get their first three points of the league campaign and will look to kick on in the FA Cup on Saturday 21st August when they host Newmarket Town and then return to league action with another home game against Gorleston on Tuesday 24th August.