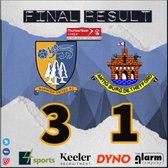 Liam Jackson at the double as Planters win comfortably

Following Norwich United’s morale boosting victory over higher level Bury Town in the FA Cup on Saturday, The Planters returned to league action at home to Thetford Town on Tuesday 7th. Thetford came into the match with 4 points from their opening six games, picking up their first win of the season in their previous away match at Long Melford.

There were a few changes to the Norwich United line up, Ryan Dickerson retained his place in goal while Adam Probert made his first start of the season at right back. Shaun Wones joined Sam Watts in central defence, having played in midfield previously this season, while Mac Gee remains ever present at left back. Dillon Alexander played in central midfield with Haydn Davis and Matt Daniels to either side, Kyle Richardson played just behind a strike partnership of Alby Matthews and Liam Jackson.

The first good chance of the game fell to Norwich United on 15 minutes as Alby Matthews found himself clear of the defence, one on one with the keeper but having sprinted from the half way line with the ball, Matthews tried to slot the ball past the keeper but his effort was parried away by the Thetford keeper who did well to race out and narrow the angle.

On 31 minutes, Planters launched a dangerous breakaway following a Thetford corner, with Liam Jackson running the ball from half way up to the Thetford goal but his left footed effort was blocked. Norwich United had lots of corners and generally controlled the first half, with Alby Matthews hitting the bar on 40 minutes, but were unable to break the deadlock. Thetford for their part offered a threat through their pacy winger Joao Valela who forced Ryan Dickerson to charge out of his goal to tackle him, late in the first half.

Thetford Town started the second half brightly and Ryan Dickerson had to be alert in the Planters goal to stop a near post effort after 50 minutes but Norwich United continued to exert pressure and on 55 minutes Liam Jackson opened the scoring, heading home following a cross from Haydn Davis.

On the hour mark Liam Jackson scored his second goal, doubling Norwich United’s lead, when he converted from close range at the near post following a back post flick on from an in swinging corner.

Jaiden Snelling, Harry Barker and Lennie Blythe all came off the bench, while the score remained 2-0 to the home side, for Alby Matthews, Matt Daniels and Dillon Alexander respectively. The Planters scored a third goal on 79 minutes through a Sam Watts header following a deep far post corner, could perhaps go down as an own goal but either way the goal as good as won the game for Norwich United.

Thetford managed a consolation goal as Elliot Smith scored the third goal of the night to come from a corner but it was never going to make a difference to the result as Norwich United picked up an overdue second league win of the season.