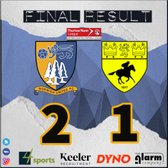 Norwich United faced a Newmarket side who were previously unbeaten in the league before Saturday’s match, Planters could go into the game with a degree of confidence however having beaten Newmarket 1-0 in The FA Cup last month. This league encounter started in a similar fashion with both teams lively and physical from the off.

Newmarket played a lot of long balls forwards and numerous crosses launched into the Norwich United 18 yard box, but the Planters defended resolutely. It was the in form Liam Jackson who put Norwich United into the lead with a header on 27 minutes. Which was to remain the score until the second half.

Newmarket refused to give in and the second half followed a similar patter to the first. Following a spell of pressure Newmarket did manage to score an equaliser on the hour mark and had to produce something special to beat Dickerson in the Planters goal. It was an excellently taken strike by Sam Gomarshall from outside the box into the bottom left corner of the goal.

Norwich United didn’t let this set back deflate them and put themselves back in the lead after Mac Gee popped up at the far post to convert from a corner in the closing minutes of the game. Giving Planters a deserved 2-1 victory.

However the drama wasn’t over as late substitute Andy Eastaugh was adjudged to have committed violent conduct, however accidental it appeared from this reporter’s angle. The incident was met with more than one volley of foul mouthed verbal abuse from Newmarket players towards the referee which in a week when local leagues have made alarming statements about the lack of officials in the area left a slightly sour taste.

However Norwich United continued their improving form with a big win against tough opponents in Newmarket Town.