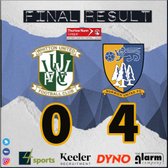 Planters in comfortable midweek away win

Norwich United travelled to Whitton United on Tuesday night on the back of three consecutive victories. It was a wet and misty evening, which may go some way to explaining by far the lowest crowd we have seen in the Thurlow Nunn this season. Regardless the Whitton committee and support were friendly and accommodating with the bar well stocked.

Norwich United started this game very brightly, going ahead through a Haydn Davis free kick after 3 minutes, while Liam Jackson added a second goal after just 5 minutes, effectively winning the game very early on. Despite this Whitton did play the ball around quite nicely and had their moments in the game.

With some improvements to their defensive play and perhaps attitude (one substitute spent the entire second half chatting to his mates on the sideline and heckling travelling supporters rather than warming up in any meaningful way) Whitton could go onto improve significantly as some of their approach play was very positive.

On 50 minutes Planters added a third as Liam Jackson chased down a poor back pass and nudged the ball under the keeper into the bottom right corner of the Whitton goal. While on 69 minutes Liam Jackson completed his first hatrick since his return to Plantation Park and hopefully the first of many! Liam has now scored seven goals in his last four games.

Shortly after Norwich United’s fourth goal the Whitton number 9 was sent off for a horrible challenge on Dillon Alexander which could have caused serious injury, the striker was rightfully sent off by the referee. With Whitton then down to 10 men a remarkable comeback was never on the cards anyway and Planters celebrate their biggest win of the season so far.