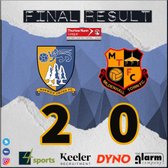 Mildenhall’s front two were lively and quick again and the Norwich United defence, marshalled by skipper Sam Watts and Mac Gee at centre back, had to be alert and focused to maintain a clean sheet. The Planters broke the deadlock after 14 minutes, when Harry Barker was shoved off the ball on the right touchline around 10 yards back from the Brantham corner flag. Haydn Davis delivered an in-swinging free kick with his left foot, Alby Matthews connected with a great header which diverted the ball into the top left corner of the Brantham goal.

Norwich United played some superb football particularly in this opening half, with a midfield including Melanson, Richardson and Daniels producing pleasing passing football in dangerous areas. While Forbes, Matthews and Jackson were full of direct running up front, keen to take the game to their opponents and run at defenders at pace. Unfortunately Matt Daniels went down with an injury in the closing stages of the half and seems likely to be out of action for the next few games Adam Probert came off the bench to replace him moments before the referee blew for half time.

Norwich United continued to control the game in the second half but Mildenhall were starting to create a few more chances and looked capable of getting an equaliser, with them having breached the Planters backline twice three days before this game there was good reason to be wary of this.

However on 83 minutes Alby Matthews produced a moment of magic, where he cut in from the left hand touchline beat his man and launched a fierce driven shot at goal from at least 30 yards out, beating the Mildenhall keeper and putting The Planters two goals to the good. Matthews having scored both goals and been a constant threat to the Mildenhall defence.

Norwich United brought on Lennie Blythe and Jaiden Snelling during the second half for Kyle Richardson and Jordan Forbes and were able to see out a relatively comfortable 2-0 victory which all at the club will be very pleased with. Norwich United keep up their winning run and will hope to continue their good form when they host Brantham Athletic in the league on Saturday.