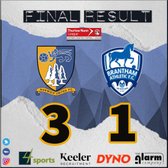 Planters continue their winning run at home to Brantham

Norwich United faced Brantham Athletic in their fifth home game in 18 days, The Planters came into this league match having won six of their six games in September while Brantham had started the season well with two wins from their opening couple of games but hadn’t won since having faced some strong opponents in recent matches.

On the morning of the match Norwich United announced the signing of Thomas Hunter who was immediately included albeit as an in the end unused substitute. The Planters starting eleven consisted of Dickerson in goal, Watts, Wones and Gee across the back, Barker and Davis on the flanks, with a midfield trio of Alexander, Melanson and Richardson in a slightly advanced role. Up front, the in form pairing of Alby Matthews and Liam Jackson.

Norwich United opened the scoring on 28 minutes when Haydn Davis released a deep, in swinging free kick from the right flank which was firmly headed home by Planters captain Sam Watts. On 42 minutes Brantham were able to score an equaliser which Norwich United will have been disappointed to concede, meaning the home side went in at half time perhaps feeling hard done by to be level given their general control of play, while Brantham will have been given a much needed boost by their sudden restoration of parity.

Happily it didn’t take long for Norwich United to get themselves back in front and the goal came from another superb set piece delivery and conversion by The Planters. Just two minutes into the second half, Max Melanson swung in a corner and Liam Jackson scored with his head adding to his increasingly impressive goal tally this season.

Brantham were, in this reporter’s opinion, over zealous to say the least in their berating of the officials, with aggressive, insulting language used numerous times. Brantham defender Nathan Rowe was deservedly sin binned during the second half and Brantham’s manager was also booked by the referee who pleasingly refused to leave this dissent unchecked and would have been within his rights to go further.

As he often does, Norwich United Manager Steve Eastaugh made all three of the changes permitted during the second half with Richardson coming off for Jordan Forbes on 65 minutes and later Snelling replaced Jackson and Probert came on in place of Haydn Davis. It was two of these substitutes who combined on 83 minutes to make the game comfortable for the Planters with a third goal and therefore a two goal cushion.

Adam Probert picked the ball up on the left side of the Brantham penalty area and after his customary good first touch, passed across the box to Jordan Forbes who finished well from the centre of the area. Norwich United will be pleased to have picked up another win in a hectic month of September and will look forward to a chance to continue this run away at Swaffham Town on Tuesday.