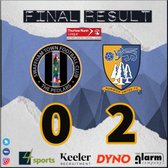 Norwich United travelled away to Swaffham Town on Tuesday evening on a night when winter seemed to be well on it’s way, this coupled with Swaffham’s poor start to the league season may have contributed to the low attendance, where the travelling support nearly outnumbered the home fans.

Nonetheless Swaffham’s staff and volunteers were friendly and accommodating, with a decent selection of drinks, including this reporter’s first sighting of Brewdog beers available at a football clubhouse and one of the few grounds in the league to offer chips and other hot food at half time, a particularly pleasant surprise on a sparsely attended Tuesday night game.

Norwich United came into this match having won seven out of seven this month whereas Swaffham had yet to pick up a point in the league this season as they headed into their tenth match. Norwich United played ‘downhill’ in the first half with Swaffham kicking the game off. Norwich United were able to play some decent stuff as their quick turnover of the ball and pace up front caused Swaffham’s solid and experienced looking defence plenty of problems, with numerous dangerous crosses flying into the Swaffham box, The Pedlars, for their part, did cause the Planters defence one or two scares and another day could have scored if luck had gone their way.

However Norwich United always looked to be the most likely to score and did just that on 20 minutes when Adam Probert playing in an unfamiliar attacking midfield role added his second assist in as many games with a cross from the right which Jackson headed home to put the Planters into the lead.

New signing Thomas Hunter started in midfield and looked impressive on his debut, passing the ball well and looking to play ambitious through-balls when the opportunity arose. Hunter also took some of the corners during this game, adding another set piece taker to the Planters squad who already have Haydn Davis, Max Melanson and a few others vying to take free kicks and corners and with plenty of recent assists from these methods.

Planters added a second on 34 minutes, when Liam Jackson chased down a lobbed through ball which this reporter assumes came from Lennie Blythe, as Jackson and the Swaffham keeper both ran towards the floating ball, Jackson got the ball first and deftly volleyed it over the keeper and into the corner of the net, showing great composure and control to not overhit the effort and miss the target. A first half brace for Jackson put Norwich United into a comfortable lead as the referee blew his half time whistle.

The second half was a little bit of a non-event as the game became somewhat flat. Norwich United had a clear lead and seemed unlikely to concede during the second half, while the incentive to attack was diminished by the comfort of their two goal cushion and perhaps a slightly less experienced line up than usual.

Swaffham were resilient and can be pleased with their own second half performance where, although they created little, keeping the Norwich United frontline quiet even for a half could be seen as progress given the home side’s defensive record to date.

Jaiden Snelling, Alby Matthews and Kyle Richardson all came off the bench in the second half for Barker, Jackson and a stud-marked Adam Probert respectively and The Planters were able to keep up their 100% record for the month in all competitions with minimal fuss, albeit with few fireworks either. The club will look ahead with excitement to Saturday’s tie away at Stamford in the FA Cup Third Qualifying Round, the furthest the club have ever reached in the world’s oldest football competition, in it’s 150th year.