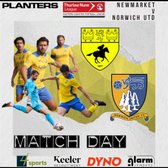 Planters lose away from home

Following the previous weekend’s home match against Fakenham Town being postponed due to the effects of Storm Eunice, Norwich United travelled to Newmarket Town on Saturday.

The Planters have beaten The Jockeys twice at home this season back in August and September, winning 1-0 and 2-1 in The FA Cup and League respectively. Newmarket came into this match having followed a run of three consecutive draws with a 2-0 loss away at in form March Town United.

Norwich United’s February form had been good, having drawn with 4th place Mulbarton at Plantation Park and then beating Haverhill Rovers 2-0 away from home, securing a first clean sheet of 2022.

Newmarket Town possess impressive modern facilities and ground, the most significant being the only 3G surface in the Thurlow Nunn Premier. From the sidelines to the untrained eye this looked an impressive surface and superior to some of the 3G surfaces seen elsewhere. Off the pitch, supporters are well catered for, quite literally as Newmarket offered by far the widest range of culinary options in the league! And seemed to be doing a brisk trade throughout, if only every ground had such options available! The bar was also a pleasant experience, clean and modern but with a definite football club house feel.

Norwich United lined up with the ever present Ryan Dickerson in goal and the defence that has started most games in 2022. Consisting of, from right to left: Jordan Forbes, Sam Watts, Mac Gee and Tom Hunter. In midfield, Matt Daniels and Dillon Alexander were unavailable so Manager Steve Eastaugh selected recent signing Harry Pitcher alongside Max Melanson, Haydn Davis and Kyle Richardson. Up front were the expected forward pairing of Liam Jackson and Alby Matthews.

The first half was an entertaining spectacle in the late winter sunshine, Norwich United opened the scoring through Alby Matthews who ran down the left flank and crossed towards Liam Jackson after 13 minutes and the cross deflected off a Newmarket centre back’s head to give The Planters an early lead.

Newmarket equalised 9 minutes later as a long range effort evaded Ryan Dickerson, bouncing against the post and into the Planters net. Despite this set back Norwich United restored their lead through Liam Jackson who rounded the keeper and slotted the ball into the net after 36 minutes to put his side 2-1 to the good at half time.

The second half did not go to plan for Norwich United. Newmarket appeared to change formation and made a substitution at half time and they significantly upped their game. Pressing Norwich United hard and stretching play, with their left winger particularly dangerous, having shifted position from the first half.

Newmarket scored three in the second half to turn the game on it’s head and enabling the home side to celebrate what had seemed at half time to be an unlikely win. The game ended 4-2 to Newmarket as Norwich United struggled to respond to their rejuvenated hosts in the second half.

Norwich United will be disappointed to lose a game they were winning at half time. Having scored two goals away from home, The Planters would expect to take at least something from the game. Newmarket’s second half performance was excellent but Norwich United will be disappointed to concede four goals to a team below them in the table, who they have previously beaten twice in the early stages of the season. The Planters will turn their attentions to Saturday’s home game against Woodbridge Town, where they will hope to return to winning ways.