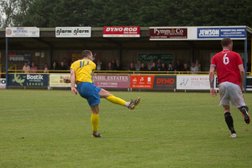 Planters progress in The FA Cup

Norwich United faced their divisional rivals Newmarket Town on Saturday in the Preliminary Round of the FA Cup, having beaten Long Buckby AFC to reach this stage of the competition. Newmarket had beaten Northamptonshire’s Wellingborough Town in the Extra Preliminary Round to earn this tie at Plantation Park.

Norwich United started the game with Ryan Dickerson between the sticks, a back three of Sam Watts, Dillon Alexander and Mac Gee, Harry Barker played at wing-back as did Haydn Davis who made his first start of the campaign following an injury disrupted start to the season. In the middle of the park were Shaun Wones and Kyle Richardson, with Max Melanson playing in a more advanced midfield role, while Alby Matthews joined Liam Jackson up front.

The first half began at a lively pace with both sides keen to compete in this prestigious competition. Newmarket had some excellent chances in the first half, where Ryan Dickerson kept Norwich United in the game with a string of superb saves. The Jockeys’ number 6 Jon Carver stood out for the visitors, nominally playing at centre back but frequently popping up as an auxillary striker throughout the game, in an unusual but effective tactical ploy.

Both teams had chances in the first half and the game was played at a healthy pace with Newmarket Town looking strong and dangerous when in possession. Norwich United’s Alby Matthews had an ongoing battle with Jon Carver throughout the game while Harry Barker was able to find space on the right flank on occasion, however the score remained goalless at the break.

Norwich United began to take control of the game in the second half and dominated play in the opening minutes of the half, Liam Jackson had a few chances in the second period but veteran goalkeeper Danny Gay had a good game and kept the Planters at bay until the 73rd minute when Kyle Richardson set up Alby Matthews to score his first goal for the Planters.

Matthews ran with the ball before using his left foot to strike the ball from a position to the right of the penalty spot into the bottom left hand corner of the goal. It required a great finish to breakthrough the resilient Newmarket backline and it was Matthews who delivered during a great performance where he was a constant threat and kept the visitor’s backline under pressure throughout the game.

Matty Daniels, Adam Probert and Jordan Forbes all made appearances from the bench replacing Melanson, Richardson and Matthews during the late stages of the game. Norwich United will be delighted to beat a side who had won their five games in all competitions so far this season and look like strong contenders in the league. The Planters now progress to the First Qualifying Round of The FA Cup for the first time in seven years.