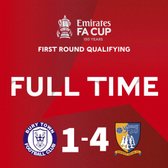 Planters triumph in the FA Cup away to higher level opposition

Norwich United travelled away to Bury Town for the first time since September 2017 when the teams shared the points in an Isthmian North match. Bury have an excellent ground with a lovely old stand encompassing a ‘proper’ tunnel for the players and officials to enter the pitch from. A friendly atmosphere and excellent hosts all round.

Norwich United started the game in what looked like a 3-4-1-2 formation with a central midfield three of Matt Daniels, Kyle Richardson and Max Melanson. It was the first time these three quite technical, ball playing midfielders had all started a game together and they really seemed to combine well.

Planters opened the scoring in the 16th minute when Max Melanson took a short corner, received the ball back and then pinged a cross to the far post, where Mac Gee was able to slot the ball home from close range being left unmarked at the far post.

On 24 minutes Liam Jackson scored a second for Norwich United as Kyle Richardson surged forwards from the half way line, waiting just the right amount of time, before releasing the ball to Jackson who slotted home to put The Planters two goals to the good.

Bury Town had slightly more possession than Norwich United throughout the first half and this pattern continued into the second, however it was the Planters who were able to break forward incisively and create the better chances.

On 50 minutes, Jordan Forbes launched into a jinking run before releasing the ball to Harry Barker on the overlap, Barker then, presumably looking to cross, drilled the ball towards the near post, where the keeper fumbled and the ball shot into the top corner of the net, putting the Planters 3-0 up over their Step 4 opponents.

Bury Town responded immediately, and scored almost immediately after Barker’s goal but the momentum did not swing in their favour. Norwich United continued to focus on their own game, while defending resolutely, with a returning Andrew Eastaugh particularly determined and resilient at the back.

On 63 minutes great work by Haydn Davis on the left, allowed Jackson to square the ball to Jordan Forbes who scored with an exquisite finish. Norwich United will be delighted to progress to the Second Qualifying Round for the third time in their history.